Pihla Pekkarinen Leave a Comment on 2017 in Netflix Original Films

Pihla Pekkarinen reviews a few Netflix titles from the past year.

Netflix has recently set a target of releasing eighty new original films in 2018. That’s eight-zero. And 2017 wasn’t far behind that, with over fifty new dramas, comedies, and documentaries released into the world branded with the unmistakable red logo. Which is great for those of us who sometimes cannot be bothered to get out of our pyjamas and go pay twenty-eight pounds for a movie ticket (London, anyone?). If you feel the same, and are looking for some tips on what to watch next, here are my thoughts on seven of the films that came out this year. Enjoy a bag of microwave popcorn from the comfort of your bed and make the most of your Netflix subscription!

I Don’t Feel At Home In This World Anymore

Macon Blair has hit the ground running with his directing debut, I Don’t Feel At Home In This World Anymore. The film tells the story of an average woman turned James Bond after uncooperative authorities refuse to help her solve the robbery of her house. And it does it in a completely original way. The pair of protagonists (played by Melanie Lynskey and Elijah Wood) are oddball hermits who are more and more lovable with every passing minute, and their reactions to being thrown in the midst of professional criminalism are so poignantly real that you can’t help but laugh. Indeed, this film might masquerade as a crime film but it’s a comedy through and through, from the absurdist violence provoking inappropriate laughter to the familiar attempts by the central characters to emulate what they have seen in spy films and failing miserably. The costume designer and hair and make-up artists have managed to create exceptionally average characters and even unattractive characters, which only makes me love them more. I Don’t Feel At Home In This World Anymore is, despite its unnecessarily long name, absolutely my favourite Netflix Original film of this year.

Imagine Babe, but set in rural South Korea. With Cruella de Vil chasing after the sympathetic pig. Oh, and the pig is the size of an elephant. Then you have Okja, a new film about an environmentalist corporation breeding intelligent super-pigs for sustainable meat production. Okja is a classic tale told with a fresh perspective and a skilled manner, and there is a lot to like. The child actress Ahn Seo-hyun playing Mija, caretaker of the titular superpig, is phenomenal, as are the rest of the cast. The animation of Okja is precise and realistic, and the cinematography in general is balanced and beautiful. And while the story seems simplistic, good vs. evil, the black-and-white tonalities split into rainbows of gray as we are made to appreciate the antagonist’s motivations and exposed to the naïveté of the freedom fighters. If you are one to cry at movies, this one will turn on the waterworks. To Each Their Own

I am the first person to admit my knowledge of horror films is pretty much equal to my knowledge of pharmaceutical engineering: that is, next to none. From what I have understood after further explanation, Little Evil is meant as a caricature of a horror film, poking fun at all the classic tropes and motifs of classic horror. As someone with no knowledge of the genre, what I saw was a poorly-executed, hardly frightening, half-hearted attempt at a scary film. I didn’t really have patience for Gary (Adam Scott) which made it difficult to root for the “good guys”, and was overall mostly bored. Looking back on it. I recognize that the gruff voice and countenance of the devil-child Lucas and the absurd scenes with the cult are meant to be funny references to genre-specific imagery, but I completely missed them the first time around. So, for someone who has a) watched a fair bit of horror and b) would be amused by a self-mocking comedy within that genre, this film may provoke the same positive reaction I had to I Don’t Feel At Home In This World Anymore. Then again, I wouldn’t know.

We have seen this film many a time before. The Incredible Jessica James is basically textbook: struggling artist in New York meets rich businessman, they overcome their differences and fall in love. Cue a lot of shots of the New York skyline accompanied by funky music, romantic two-shot strolls in Central Park and a phone call with an extroverted best friend from their respective bedrooms. However, this film is clearly from 2017: instead of a damsel in distress just waiting to be saved by the relationship of a lifetime, the protagonist is a six-foot badass black woman with piercings and an attitude. Jessica James dominates this film and its central relationship from start to finish, and is at times cocky enough to be annoying, which is wonderfully refreshing from a female protagonist. And while, yes, her best friend is nothing more than the usual bubbly, eternally single, always-there-for-you shell of a character, at least she’s a lesbian. That’s something, right?

Aside from Thirteen Reasons Why, To The Bone is probably the most controversial release from Netflix in 2017. It has been widely criticised for its glamorisation of eating disorders and the lack of cast diversity. In terms of its filmic value, it has been called “impressively accessible” (Hollywood Reporter) as well as “insipid and uninsightful” (The Guardian). Personally, I lean toward the latter camp. To The Bone claims to be revolutionary, a film which takes eating disorders and looks at them like no movie has ever done before. The result is a film saturated with stereotype, from excessive amounts of kohl eyeliner and an absent father to a supposedly unconventional therapist who comes off as condescending and power-hungry. The beginning is uncomfortable, the ending is bizarre, and the middle is a lighthearted young adult novel turned to pictures. However, Collins embodies the angry twenty-year-old character written for her to a T, and her relationships with her sister and the friends she makes at the recovery home do provoke some sympathy. And given the mixed reception for the film, you may find something more in it than I did – but the cynic in me can’t seriously applaud any movie with people dancing in a rain room just because they’re alive.

Premise: interesting. Execution: not so much. The Discovery, a film about the struggling son of a man who proved the existence of an afterlife, starts off tolerable, but quickly disintegrates into an overly dramatic, highly predictable cliché of a film. Beginning with the title all the way to the credits, screenplay is cringeworthy, and the lack of chemistry between the actors is striking. This film doesn’t shock, tickle, or move a single nerve. And while the philosophical questions posed at the beginning of the film are promising – if the proof of an afterlife caused millions of deaths, are they justified and should the man behind the discovery feel responsible? – there is no significant attempt to answer them. Overall, this film just feels like a poor man’s attempt at Inception or Matrix, so save your time and watch those instead.

The Meyerowitz Stories, a film centered around the interactions of a dysfunctional family, was, in a word, Groundhog Day-esque. Every time the screen cut to black and I sighed with relief that the film was finally over, it just kept going. It is tough to summarize what the movie is about, because it really isn’t about anything. It jumps around absurdly from scene to scene with no apparent connection between them, introducing new characters just to toss them to the side five minutes later, and the central characters who do remain are so unbelievably infuriating I wanted to bury myself in the ground. The choppy cuts felt as though I was supposed to respect them for their artyness (I didn’t), and I think I was supposed to read something into the ever-recurring shots of characters running places (I didn’t). There are some glimmers of hope: Sandler is remarkably less awful in this film than in his others, and Adam Driver’s brief appearance provides the only point at which I am able to laugh with the film, not at it, but these things are not enough to save the film from being a catastrophic trainwreck. I suppose it should be noted that other critics – professional ones, who know what they’re talking about – have hailed the film, calling it “flat-out brilliant” (Rolling Stone) and the best ever release from Netflix. I tried to see their point of view, I really did, but I could not escape the gnawing feeling that accompanied me throughout the film: all things considered, I’d rather be in Philadelphia. 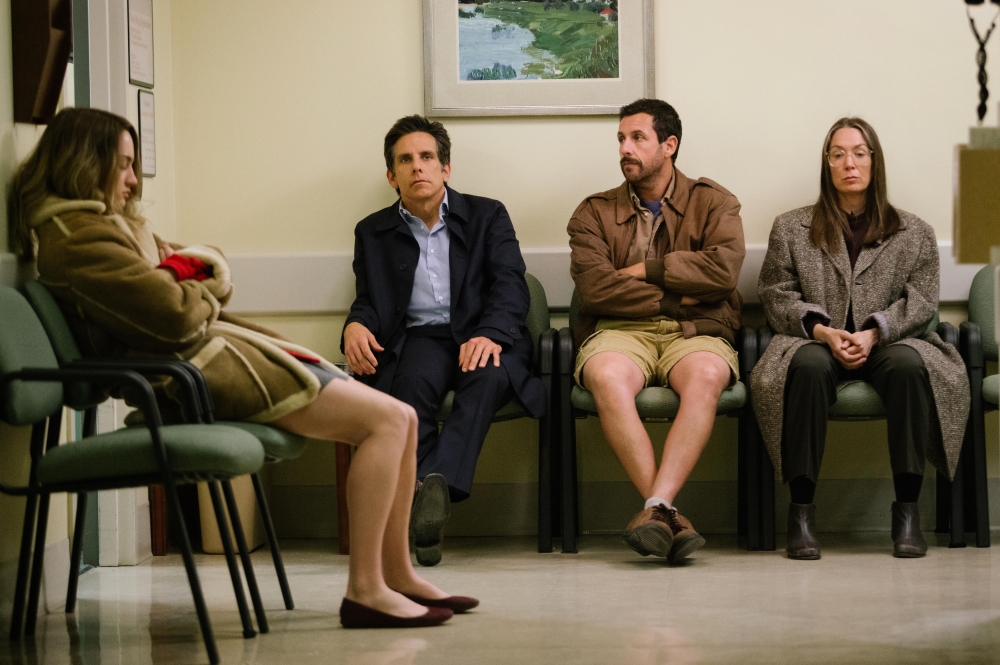