Michael Moore’s newest documentary may market itself as a fully loaded gun aimed at none other than the 45th President of the United States, but the reality is somewhat different. Fahrenheit 11/9 (the title a reference to Moore’s 2004 feature concerning the war on terror, Fahrenheit 9/11) is rather a full-scale exposé on the downfall and ultimate failure of American democracy in the 21st century.

For the film’s first 20 or so minutes, however, you’d be forgiven for not realising this. Moore sets his audience up with a fairly straightforward rehash of the later stages of the 2016 US election (emphasis on the word “fairly,” as, let’s face it, this is Michael Moore we’re talking about). It’s from here that we’re spun in a completely different direction, as a perhaps slightly tenuous, but overall necessary, link is made back to the director’s hometown of Flint, Michigan.

Throughout his filmography, Moore has rarely failed to return home. Whether he’s focusing on a Flint-based story such as in his 1989 debut Roger and Me, or covering more widespread issues such as gun control in 2002’s Bowling for Columbine, Flint is always featured prominently. But never has this homecoming felt more crucial. For the past four years the town has been experiencing a water crisis which has essentially poisoned the entire population, a situation which became widely mediatised earlier this year, and I’d been wondering for a while when Moore would announce that he’d be covering the subject. Watching the first segment on Flint, I thought this was it, that Moore had simply used the inherent bait that is Donald Trump to shed more light on an issue which still threatens his hometown. But you’ll soon realise that this, too, isn’t quite the case; instead, it’s merely a part of the overarching argument.

Moore takes us through a series of segments which tackle some of the most important, and decidedly controversial, subjects surrounding the USA over the last few years. From the Parkland shooting, to teachers’ strikes, to the allegations of rape and sexual assault levied against a number of men prominent in the news media (and interestingly, as the film notes, many of whom were critical of Hillary Clinton during her campaign): Moore spares nothing and no one, even criticising the actions of former President Barack Obama. 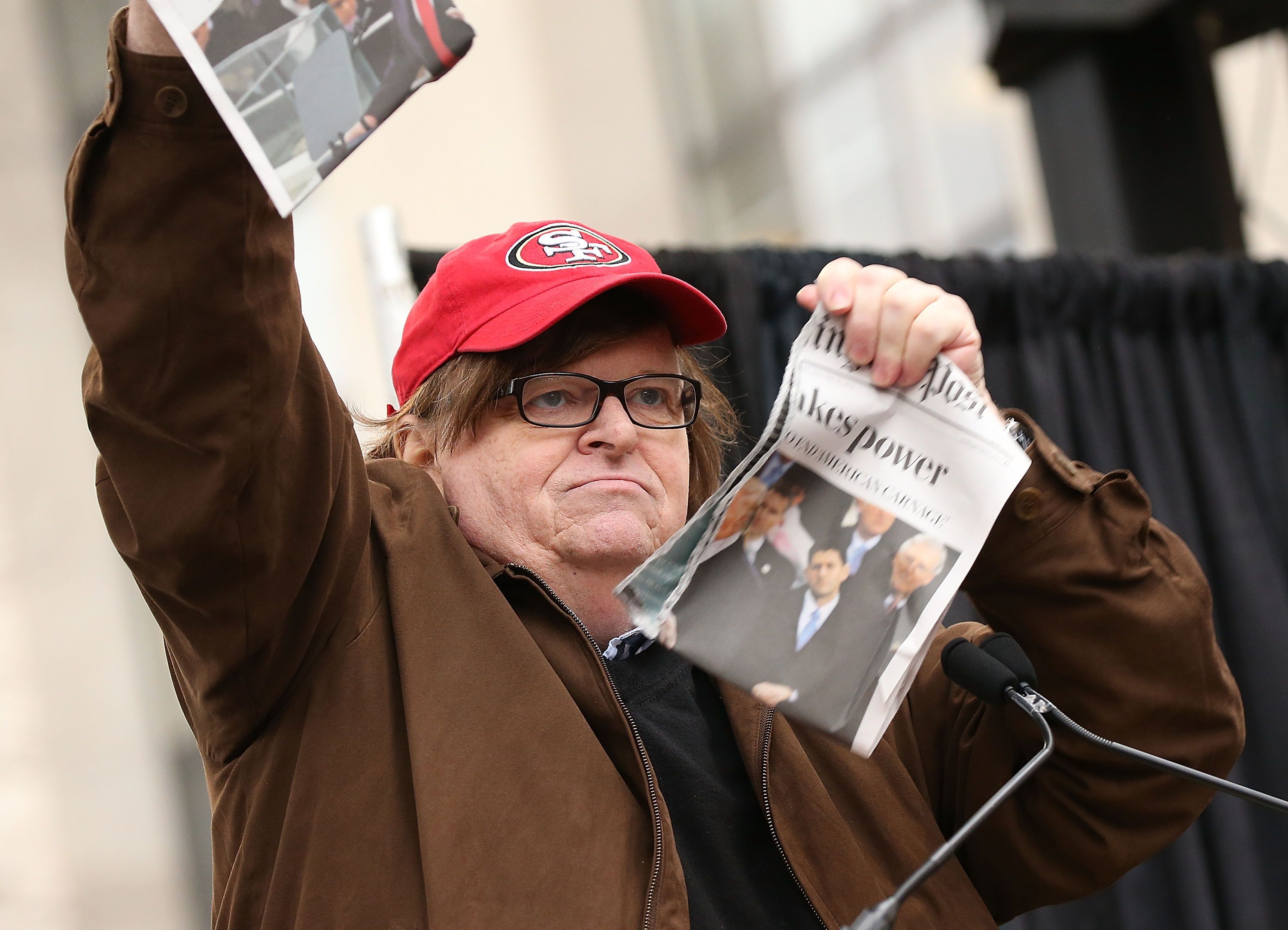 In spite of this, the director seems to have somewhat restrained his usual style. His interviews are less guiding, with fewer witticisms; in fact, Moore spends most of the film behind the camera, rather than in front of it. No need to worry for Moore fans, though – his style hasn’t disappeared altogether. Acts of stunt journalism, such as attempting a citizen’s arrest on Michigan Governor Rick Snyder before soaking his front garden in water from Flint, serve as proof that Moore is undoubtedly still a performer. If anything, he seems to have finally found a perfect tonal balance, with enough dark comedy to create excitement, interest, and controversy, but not so much that it cheapens the gravity of the subject matter.

At the beginning of this documentary, the audience, faced with footage of the night of the 2016 election, is asked a question: “How the fuck did this happen?” We assume it references Trump, and in a way it does, albeit indirectly. This film, with a scattershot approach seemingly focused on every heartbreaking American crisis of the past few years, begins to make sense of how democracy failed the United States’ public so badly. Trump, in all his toxic glory, is simply the symbol of that failure. Flint, and Parkland, and everything else, represent the other side – the side of those who have been disenfranchised by the current system. Poisoned, unprotected, shot at, and killed, they have given up faith in their system – and who can blame them? Want to know why Michael Moore is angry again? That’s why.

Fahrenheit 11/9, convoluted though its argument is, makes the reason for Moore’s anger clear. It even offers a solution, and a simple one, too: to act, to vote, to get up and do something. It may feel like a slightly naïve message, but as this documentary indicates, there isn’t really a better option.

Fahrenheit 11/9 is currently released in UK. Check out the trailer below: