By late 1945, Anglo-American relations were particularly frayed. Despite their support in the final defeat of the Nazis, Americans had earnt themselves a sour reputation with their British allies. Famously referred to as ‘overpaid, oversexed and over here’, American GIs were repudiated as latecomers with a penchant for letching after the local womanfolk. This reputation was not entirely unearned, but it was also not conducive to postwar diplomacy. Efforts by the British Government to improve the situation included the commissioning of a script that might bring the Brits and Yanks closer together; and who better to front it than writing-directing dream team Michael Powell and Emeric Pressburger, two of Britain’s finest cinematic minds. Collectively known as the Archers, their 1944 A Canterbury Tale had already endeavoured to soften the British to their American allies, meaning they were a natural choice for the project.

This unusual premise resulted in the now-classic A Matter of Life and Death, a film as much about Englishmen and Americans as it is about our world and another, reality and fantasy. This dichotomous centre does not result in a sense of conflict, but instead a perfect balance between elements otherwise at odds – as confirmed by its daring opening. Panning across the universe, a narrator informs the audience: ‘this is the universe,’ adding, ‘big, isn’t it?’ The camera passes various galactic phenomena that are described with equal cheek – but detail is not shirked for comedy. The images shown are based on the advice of Arthur C. Clarke, the much-lauded science-fiction writer and space travel enthusiast, to ensure a sense of accuracy. As such fairy-tale meets hard fact, the fantastical voiceover providing whimsy to authentic spectacle. This asserts the thematic basis of the film, which will function both in the real and the very unreal.

Following this planetary overture, the camera enters Earth’s atmosphere, down into the cockpit of a Lancaster bomber, shot through with no chance of landing. Piloting this doomed craft is David Niven’s Peter, who, after ordering the rest of his crew to bail out, contacts a radio operator in England. Enter Kim Hunter’s June, an American aiding the war effort in England. Peter, with the stiffest of upper lips, calmly explains to her that his time is more or less up, given he lacks a parachute, and asks if she would send a telegraph to his mother. They speak for a while, and an immediate connexion is apparent. Jack Cardiff’s beautiful technicolour photography captures June in a fantastic red light, provided by her instruments. Peter is lit by the fires slowly consuming his bomber. There is no one else in the scene, save Peter’s dead comrade. No chatter, no referral to higher authority. Peter and June are alone, together, and apart at once. Peter jumps from his aircraft, preferring the fall to the crash, and bids a final farewell to June. A five-minute love affair, it would seem, captured and written with hands so deft that the inherent illogic of the encounter is totally lost. We are instantly under the Archers’ spell.

Suddenly the camera is in another place. The florid technicolour is replaced by a pearly monochrome, the romantic tones dropped for stark modernist design. The opening titles said the film was a story of two worlds, ‘the one we know and another which exists only in the mind,’ and it would seem this is the latter. I consider this unambiguous assertion that this other world is make-believe to be a placation of those who can see little further than the crosses round their neck (a genuine problem in 1946), enhanced by the impudent notice following: ‘any resemblance to any other world known or unknown is purely coincidental.’ Put simply, this other place is an afterlife – not heaven exactly, that would be far too limiting (read: dull), but where we go after dying. Inversing the ‘other world’ of The Wizard of Oz, this place is black and white; Powell’s explanation is typically pithy – we know that our world is in colour, but for others we cannot be sure.

Here waits Bob Trumbshawe (Robert Coote), Peter’s dead spark last seen beside him in the forsaken Lancaster. He was informed by Kathleen Byron’s character (credited as ‘Angel’) that Peter’s invoice was in, and he was expected shortly. As such he tarries in the waiting room for his friend to arrive. Waiting room is not a euphemism either – the afterlife here is typified by a sense of bureaucracy and bookkeeping. Even the wings granted to the deceased are provided in sealed plastic wraps. Combined with the modernism and monochromism we are left with a world suitably lifeless. ‘We are staved for technicolour up there,’ says Marius Goring’s Conductor in the film’s best-known line. The snag is that Peter doesn’t arrive – said Conductor missed him in the fog over the channel – he has literally cheated death. Inexplicably surviving his fatal leap, Peter awakes on the beach and, as chance would have it, passes by June. Romance quickly ensues. When the Conductor arrives to correct his error, Peter rebukes him: conditions have changed since his supposed passing, and to take him now would be unjust. He appeals against his own death, and his appeal is granted.

The brilliance of the film is in the way it presents this fantastical plotline while maintaining a consistent ambiguity to its authenticity. Peter has, on occasion, visions of this other world, but in the real one he is treated by Dr. Frank Reeves (Roger Livesey), who diagnoses him with chronic adhesive arachnoiditis. Like in the opening exploration of the universe, the film nimbly balances scientific reality with the romance of fiction. Much research was conducted to ensure accuracy regarding the condition Peter was diagnosed with, including and especially the olfactory hallucinations he experiences – the smell of burnt onions. Though of course, that could well be what heaven smells like. Many elements of the afterlife presented onscreen suggest that it is a hallucination. Consider the focus on various historical figures, nearly all European, accordant with the not-accidental detail that Peter read European History at Oxford. Everything in his fantasy has some basis in knowledge he has already accrued. Even people he doesn’t recognize, such as the great chess player Philidor, he may well have encountered and forgotten, in his immediate conscious at least. Diane Broadbent Friedman has made the curious observance that many of the various great figures featured on the ‘stairway to heaven’ set, such as Plato, Beethoven, and Muhammed (only the base of his statue is shown in a respectful gesture) were thought to suffer from epilepsy in 1945, perhaps a subtle nod to Peter’s neurological problem. The apparent confirmation of the unreality of Peter’s otherworldly encounters is the revelation that the judge of his life/death court case is the same man as the neurosurgeon who was simultaneously operating on him. Yet despite this, his impossible survival remains unexplained – the proverbial jury must remain out.

The life/death case is also where the film’s political purpose becomes most clear. The prosecution is led by the first casualty of the American Revolutionary War, Abraham Farlan (Raymond Massey), and as such is prejudiced against the British defence. Notably, Farlan is the only character to show any bigoted behaviour throughout, with all other interactions between Brit and American strikingly positive. Elements of national stereotypes are employed, such as the cultured Englishman and the brash American, but always with good humour. The only direct conflict between the two peoples otherwise is an accident, perhaps representing the sometimes imperfect, but always workable alliance as far as the Archers’ are concerned. The court case, which takes up the majority of the film’s final third, is set around whether Peter and June are truly in love – and, for Farlan, whether an Englishman and an American could ever, truly, be in love. The improvable nature of love is appropriate for the film itself, given the rather thin basis for Peter and June’s partnership in terms of narrative. Only through action can such a commitment be shown. 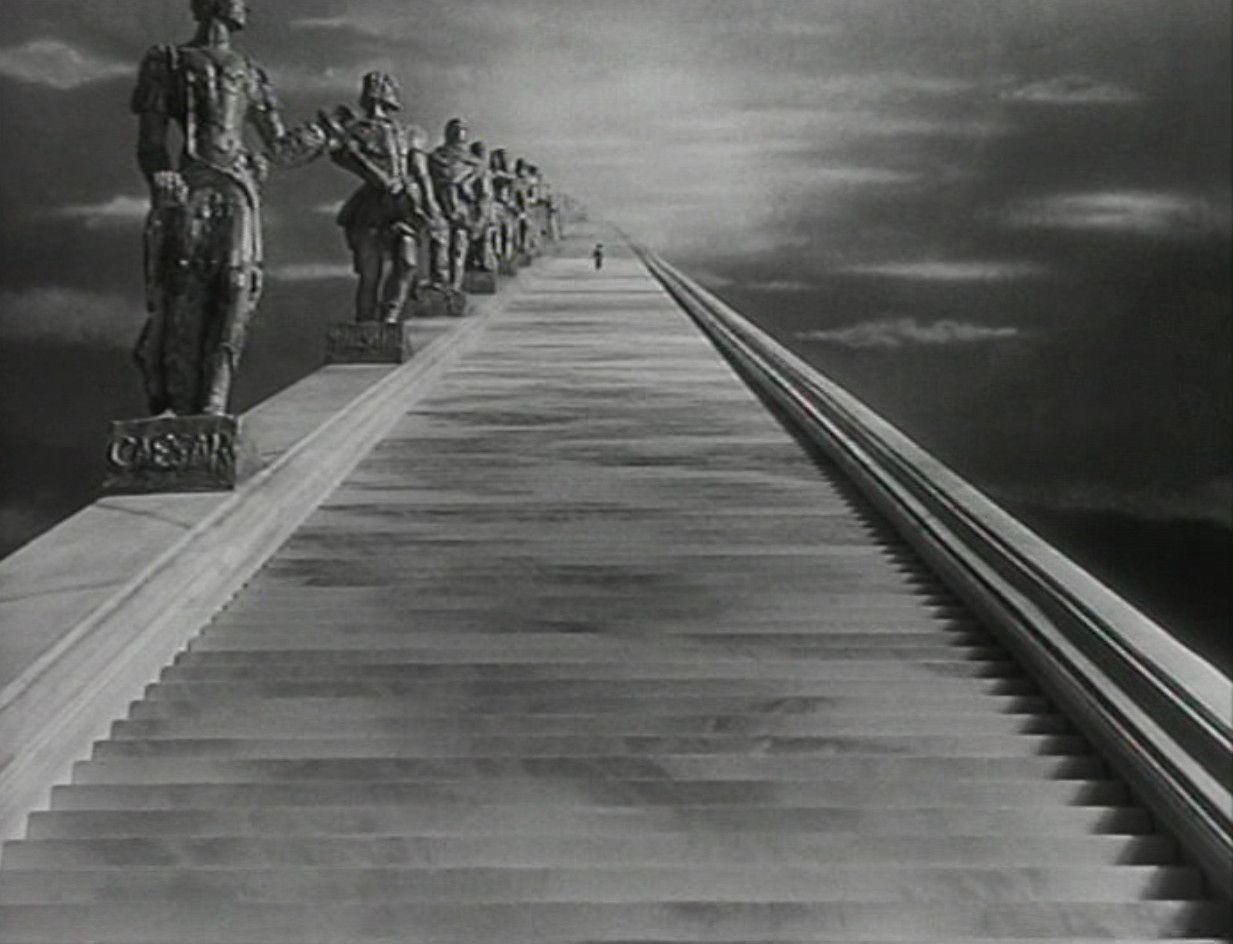 But to get to this point, first Farlan and Peter’s counsel (the recently deceased Dr. Reeves) trade blows regarding Britain itself. Farlan declares that America is the land of the free, and offers a stirring speech to its support of individual liberty. Reeves responds by claiming, in a statement about as true now as it was then, that in practical terms an Englishman is close to as free. Farlan then suggests that the jury, an international group including a Frenchman, a Russian, and an Indian, will naturally be prejudiced against the British due to past conflicts. Farlan, quite accurately, adds that Britain has conflicted with all the world, and so should face such prejudice with any jury. With some gall Reeves demands an American jury, a request Farlan welcomes. And in one of the film’s best moments, each jury member becomes an American. One by one we see their dress change to the fashions of that country, but their ethnicity remains just the same. While the reality may be far off, this is the American dream, where a Frenchman, Russian, and Indian can be held as equals under one flag. Churchill decisively used the phrase ‘special relationship’ regarding Britain and the US eight months prior to A Matter of Life and Death’s release, but it is in this film that it is first felt so solidly.

If a potential criticism is that the Anglo-American subtext is laboured a little heavily, it cannot be said that it is at the expense of other aspects of the film. Jack Cardiff’s cinematography is one such aspect that shines in every frame, technicolour or monochrome. After working as camera operator on the Archers’ exuberant masterpiece The Life and Death of Colonel Blimp, Cardiff was promoted to director of photography for not just this film, but the two subsequent features to follow, Black Narcissus and The Red Shoes, both as beautiful as this one. The use of colour is wonderful, ironically rejecting realism in the scenes that emphasise reality. ‘I love you, June, you’re life,’ says Peter as they first speak across the radio – and therein is the explanation. Life is held synonymous with love in the moment. The golden hues of Dr. Reeve’s house, or the great blues of the sky and sea, are so expansions of the love that is life. As perfect as that other world might seem, it surely cannot compete.