Dan Jacobson looks at what Danny Boyle’s vision of the apocalypse has us believe about London and lockdown. This article was written as part of the celebration of the Festival of the Moving Image, UCL’s only student run film festival, which was unfortunately canceled due to COVID-19.

Like many of us, who have dutifully stayed at home and controlled the virus without any 260-mile trips to Durham, I have spent a significant amount of time thinking about how our society might change once we begin our “new normal”. This Covid-19 pandemic has forced us to ask difficult and pertinent questions about what we want our society to look like. The debate surrounding “unskilled migrants”, now risking their lives as key workers, has suddenly been drastically reframed, the mental health of the nation is finally being taken seriously, and the decrease in carbon emissions has displayed that, collaboratively, we are able to facilitate large-scale changes which were deemed unsustainable or unachievable just three months ago.

Identifying the key values of our society was the question at the centre of John Wyndham’s excellent 1951 novel The Day of the Triffids, which was one of screenwriter Alex Garland’s key inspirations behind 28 Days Later and also essential reading for me earlier in lockdown. After a cosmic event blinds everyone who sees it, and while the threat of carnivorous, locomotive plants known as ‘triffids’ grows, the remaining sighted individuals are forced to restart society in the image which they see fit. Through the protagonist Bill Masen, we see multiple alternatives – utilitarian polygamy, an attempt to retain Christian values, militaristic dictatorship – which, in turn, force us to ask what we might do, and what we would value, if everything we knew was suddenly obliterated. 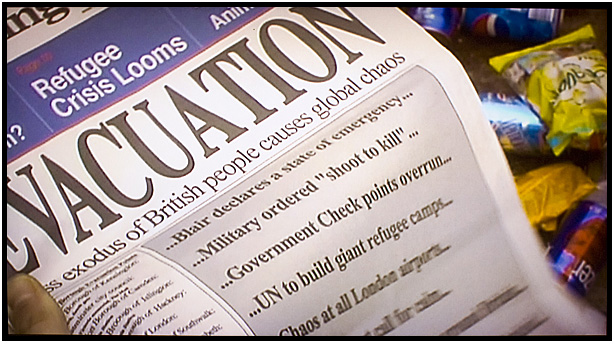 28 Days Later, which was directed by Danny Boyle and released in 2002,  has since become one of the most iconic horror films ever made, and also forces us to ask how regular humans, devoid of authority, government, or a means of retaining order, would respond following the apocalypse. However, rather than presenting these alternatives implicitly, as Wyndham does, 28 Days Later is ostensibly pessimistic, asking us if human nature itself prevents an ideal society from being created at all.

In Boyle’s post-apocalyptic horror, the threat takes the form of a “rage virus” which causes those infected to develop a terrifying, unassailable blood lust. Unlike the typical presentation of a zombie, infected individuals are not lumbering masses, but instead are agile, responsive, and aggressive, which increases the stakes and threat of infected individuals to devastating effect. However, in its Frankensteinian twist, the final ‘monsters’ are not those who were infected, but instead are the humans who have become naturally consumed by the rage which drives their bloody actions. There’s an uneasy sense that this bloodlust exists within all of us, and just needs to be triggered in order to be released.

However, this is alluded to in the very opening scene, which shows that this virus is not natural but, instead, entirely man-made. The virus was synthesized by showing videos to chimpanzees containing newsreel footage of extreme violence by humans, causing them to become carriers of the novel virus. Once released by a group of animal rights activists, a chimp bites one of them, thus transmitting the virus to humans.  It is unclear where exactly this footage is taken from, but it’s a jarring collection of fundamentalism, reactions to genocide, and violent response to rebellion against authority. This lack of authority is a shock to Jim (Cillian Murphy) who, upon first meeting two uninfected individuals, says “Of course there’s a government! There’s always a government. They’re in a bunker or a plane.” Incidentally, the military blockade in North Manchester which Jim and the remaining London survivors flee to, initially taken to be the last vestige of upstanding civilization, turns out to be essentially the opposite. 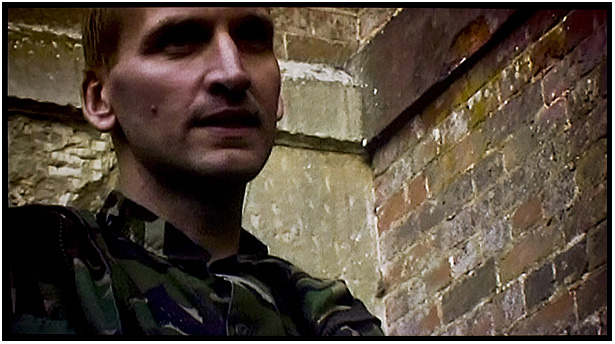 This failure and mistrust in authority is, in my opinion, what makes the backdrop of London so pertinent. The city, despite a greying River Thames and scaffolding around Big Ben, is a glimmering display of what humans can achieve. Unfortunately, this is delivered with a terrifying dose of the incredible concentration of authority and influence which can be found behind the tolling bells and shining skyscrapers. This is what makes the image of Jim, unshaven and in hospital scrubs, standing in front of the Houses of Parliament as dawn comes, such a phenomenal piece of visual storytelling – a global powerhouse that has suddenly been rendered meaningless and ineffective.

In this respect, though, it is worth examining how London, and its image of authority, feeds into this “rage virus” which was shown in the film’s opening newsreel montage. Whilst 28 Days Later was written prior to 9/11, and filming began on September 1st 2001, there are clear parallels with the response at Ground Zero, or to the invasion of Iraq. These incidents triggered an intense feeling of rage, the repercussions of which are still heartbreakingly present today, and the causes of which could, arguably, be traced back to discussions had, and decisions made, within the walls of London. 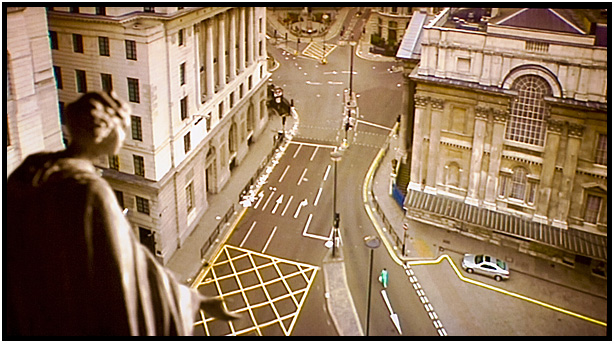 Throughout this lockdown it seems that the overall public response, as seen on our news reports and social media feeds, has been decidedly dichotomous. On the one hand it has been heart-warmingly empathetic, characterised by clapping for carers, shopping for vulnerable neighbours, and checking in on those living alone. On the other hand, there has been an intense frustration, which would be expected after the senior government advisor flouts the very rules that he himself put in place, or the President of the free world casually encourages people to treat the virus by ingesting disinfectant.

I believe that both of these factors will lead to a change in the way we conduct ourselves once we enter into our new normal. However, it is paramount that the way we respond to our frustration with authority is not driven by the rage that is rightfully brewing. The central tenet of 28 Days Later is that anger begets greater anger. If we can somehow break this cycle which caused the rage virus to arise in the first place, we can hope to not just return society to normal, but to enhance it according to the positive values which we clearly collectively share.