Milo Garner Leave a Comment on ‘The Touch’ Retrospective Review

Milo Garner looks back at a lesser-known Bergman through a fresh 2K restoration.

The Touch (Beröringen) is, quite surprisingly, one of Ingmar Bergman’s most obscure films. It came out in 1971, a point at which Bergman’s international reputation was near its peak, and more than that, was largely shot in English. In fact, its American financiers demanded that an entirely English version be made alongside Bergman’s preferred English-Swedish cut. And if that wasn’t enough, it starred Hollywood heavy hitter Elliot Gould alongside Bergman mainstays Bibi Andersson and Max von Sydow. If any film was to act as an accessible entrance into the Swede’s cinematic world, it would be this one. But upon its release, it received mixed reviews and slumped at the box office; ironically it was one of Bergman’s most overtly artsy films – Cries and Whispers – that would finally whisk him to the heights of commercial and critical renown. But now The Touch is being rediscovered, with the BFI presenting (and pushing with some vigour) a newly restored edition of the film. As it turns out, it is not the unmitigated disaster its reputation has come to suggest.

The film begins with Karin (Andersson) arriving at a hospital moments too late. She is told that her mother passed away just a little while ago. In a final attempt for some connection, she goes to her mother’s body and, tenderly, touches her face and hands. Perhaps this is the eponymous touch, a futile attempt to reach out to another, an ultimate failure to communicate. Still in the hospital, she meets David (Gould), with whom she has a brief and forgettable encounter, but not their last. Some time later, we see Karin and her husband, Andreas (von Sydow), entertaining David at their home; as it happens, David and Andreas are friends. David takes the initiative during a moment alone, and quietly informs Karin that he is in love with her. She is taken aback but, after some less-than-vague flirting from David, responsive. They engage in an affair that will spread over several years, and it is this affair that the film concerns.

The apparent abruptness of that small synopsis is no result of concision, either. David really does blurt out his love after seeing Karin once, and Karin really does engage in an affair with David without any significant motivating factors. This could be interpreted as a weakness to the film’s premise, but it rather serves as a gateway to The Touch’s greatest asset. While there is no lengthy monologue that explains Karin’s motivation to engage in a destructive affair, which is a notable exclusion for a Bergman film, the camera speaks in lieu. Early on we are presented a shot of her in the morning, with her perfect husband and her perfect children, preparing breakfast and getting ready for the school run. On the soundtrack, a rare moment of pop music sneaks into a Bergman picture. Coupled with the bright tones and Eastman Color photography, this scene has flashes of Varda’s Le Bonheur – a reality too perfect, unnervingly so. The Touch won’t travel the dystopian depths which that film explores, but it leaves a similar taste. Karin needs something different, something to break the perfect monotony of her life. This is again reflected through the lens – the bright scheme of her home is contrasted heavily with the dark green on the walls of David’s scrappy apartment.

Returning from one of her trysts she spends a while looking in a mirror, invigorated. She is desired again, and this stands to justify her infidelity. Of course the way in which the love affair is structured in the film lends to this angle – of desire and sex, touch of another kind. Almost every time the lovers meet, they quickly escalate to some sexual encounter – they often struggle to talk of anything else, bar David’s work and past. David himself is probably the weak-link of what is essentially a three-hander; Gould’s performance is (perhaps understandably) stilted, and his character seems to lack any outward attraction that might keep Karin interested. He is often cruel and dismissive, without a shimmer that might offset these behaviours. However, his nature does allow the film to consider another of its main concerns, and perhaps the core idea of Bergman’s filmography as a whole: connexion. 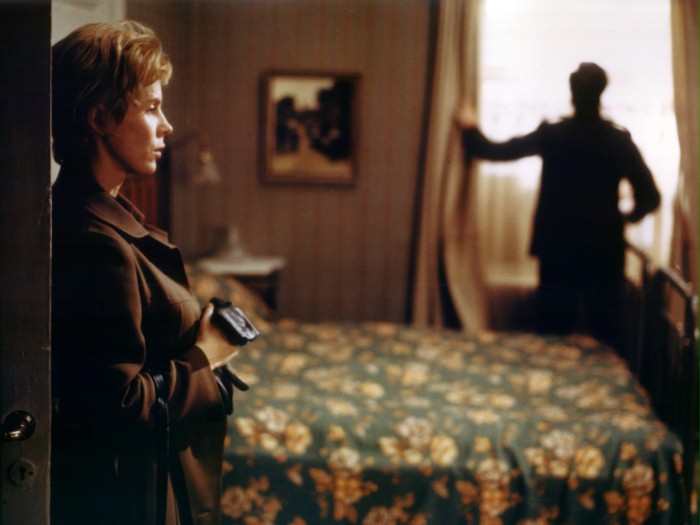 While Karin seems sated in a sexually angled relationship, David seems to both want this and something more. He wants to reach out and find something deeper between the two but, emphasised by the language barrier, a distance always remains. The scene in which Karin reads David Swedish poetry, first in her native tongue and then in an awkward English translation, perhaps best captures this. Another strong visual metaphor features a wooden sculpture of the Madonna, which David has excavated from a nearby church. He and Karin first glimpse it through an aperture in the church wall, just out of reach. Later in the film we see it again, removed from its ancient resting place. The archaeologists responsible, however, had unwittingly awoken a hive of medieval larvae that been long dormant within the effigy; slowly but surely, they eat away at the figurine from within. David suggests the statue may be doomed. But he adds that the insects eating away at it are, themselves, beautiful. Perhaps this affair, one intrinsically destructive and inherently temporary, might not be wholly ugly.

The visual content of the film is stirring, and its form is no less impressive. Nykvist is likely incapable of producing an ugly picture, but even then The Touch is exceptional. It operates primarily with an autumnal palette, deep greens and browns, often framed against minimal backgrounds. The lighting, too, is beyond reproach, with subtle tungsten beams illuminating characters despite their often-shadowy surroundings. The shots of David and Karin in the church mark a particularly good example, a soft beam grazing Gould’s face, emphasizing both bright and dark. On a more direct compositional level, there are also many moments worth mentioning. One is of Karin and Andreas, while the former is deep in the midst of her affair. She sits at her desk and her husband talks to her, three rooms down in their open-plan home. The camera does not permit this gap to be closed, using a wide lens to emphasise the distance between the two, the editing cutting between their POVs. A simple trick, but an effective one. Another moment comes in the final shot, with two lovers standing away from each other beside a lake. The camera zooms out and reveals their reflections in the water, distorted by a light pitter of rain. A consummate encapsulation of their relationship, almost rendering the argument moments before redundant. 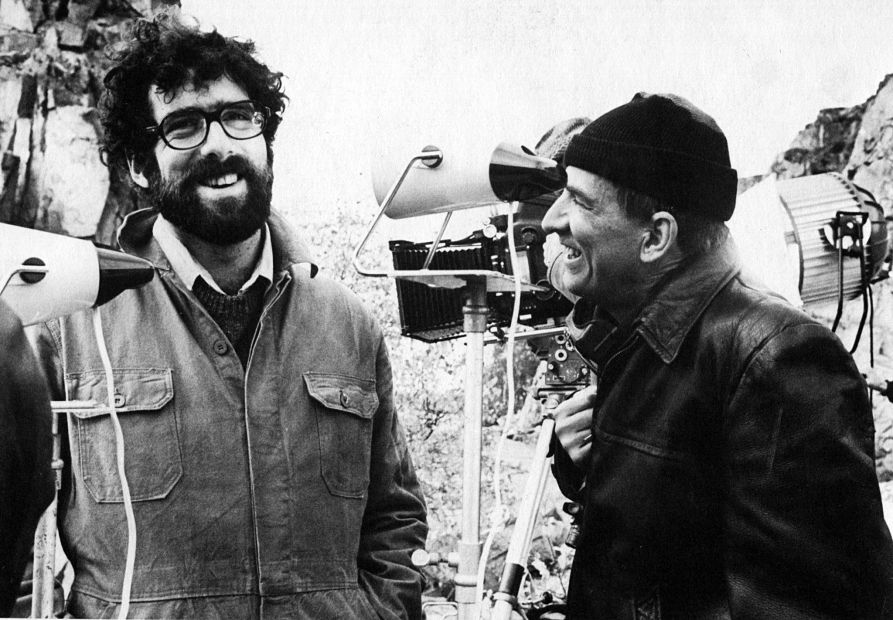 Coupled with some truly excellent editing it’s difficult to denigrate The Touch on a formal level, but its script isn’t quite as watertight. While well-told, much of the story fails to reach beyond a typical tale of infidelity. It also leaves Andreas, a potentially interesting character with a brilliant performance by von Sydow, a little too estranged from the narrative-at-large. He has one captivating scene in which he essentially plays his hand, but his feelings and experiences are left mostly unexplored. Though this is ultimately a film about Karin (who only has so much psychological depth herself), it seems a missed opportunity. The third act is especially disappointing, failing to escalate the film’s central drama effectively and losing itself in some unsure subplots. Karin’s visit to London could have been illuminating, but is ultimately a forgettable encounter that helps to derail the pondering but deliberate pace the film had otherwise held.

But even keeping these issues in mind, The Touch stands far above the station it has been so often assigned, even by its creator. Taken solely from a visual angle, this might well be among the upper tier of Bergman’s filmography, and the script can hold its own with his high average. A rediscovery worth exploring.

The Touch (Beröringen) was released in 1971.

It was recently screened at BFI Southbank as part of their Ingmar Bergman season (January-March 2018), and will be released on Blu-ray/DVD April 23rd. Discounted 3 pound tickets available through the free 25 & Under scheme.