Skip to Content
Home Blog ‘Primal’ (Season 1) Review: The Art of Survival, The Beauty of Compassion

Marcin Zembrzuski Leave a Comment on ‘Primal’ (Season 1) Review: The Art of Survival, The Beauty of Compassion

The rawest cartoon of 2019 is, in my opinion, Genndy Tartakovsky’s Primal. This prehistoric adventure thriller, equally influenced by modern nature documentaries and 1970’s pulp fiction, presents the everyday life of a caveman and a dinosaur cooperating to survive in a world of constant danger. The premise of the show is as simple as its title suggests: it is hunt or be hunted, kill or be killed, eat or be eaten. Although this might imply some monotony, Primal frequently surprises with its creativity and boldness, simultaneously pointing out that violence is an inseparable part of our reality and proving the significance of empathy.

Just like almost all of Tartakovsky’s previous creations — i.e. Dexter’s Laboratory (1996-2003), most seasons of Samurai Jack (2001-2017) and Star Wars: Clone Wars (2003-2005) — Primal was supposed to be a children’s animation, introducing the adventures of a boy and his pet-dinosaur. However, this idea, which occurred to the Russian artist about 8 years ago, did not seem to be interesting enough to be developed. It all changed when Samurai Jack’s final season got transferred from Cartoon Network to its mature audience sister station Adult Swim, which allowed Tartakovsky — the director, screenwriter and producer — to partially transform the show. He made it darker and more violent, and presented some distinctive non-dialogue action sequences. After a laudatory response, the artist started to dream about a new series that would build on this new darker tone. Then, he just incorporated it with the earlier idea of a prehistoric adventure, though it obviously meant making some significant changes. The cave-kid became a grown-up man, the dinosaur was no longer his pet, the world around them started to be extremely dangerous, and all the potential dialogues evaporated. It became Primal.

We meet Spear, the main character, as he is hunting and then, just a few moments later, is being hunted himself. Even though these first minutes clearly indicate that this is a story about the huge difficulties of survival in the prehistoric era, we are still not prepared for what comes next: Spear is not able to protect his family from a pack of tyrannosaurs who brutally devour them in front of him. Soon, after considering suicide, he accidentally comes across another group of tyrannosaurs, this time a female feeding her two cubs. The hero considers attacking them, but then the dinosaurs that slaughtered his beloved ones appear again, hungry for more meat. Spear defends the mentioned female tyrannosaurs against the predators, although failing to protect the cubs. Sharing the same tragedy and carrying a similar grief, the mother (Fang) instinctively follows Spear and they eventually become almost inseparable.

A relationship between a man and a dinosaur is far from predictable. Though Fang’s behaviour was inspired by Tartakovsky’s own dog (in its mimicry and mannerisms), she has a strong personality and is equal to Spear. They travel and hunt together, but their mutual help is contrasted with their egotism, mistrust and misunderstanding. In other words, they have to learn how to live together. The development of their complicated friendship, which is based on compassion, perfecting their hunting strategies and consequently building loyalty, is one of the show’s strongest points. Its most interesting fragments, however, come with Spear’s melancholy and anger since he sometimes recognizes in Fang exactly the same type of animal that ate his family, and considers taking revenge by killing his companion. These scenes seem to subtly refer to the theme of prejudice, since the hero has to learn the differences between various representatives of one species. 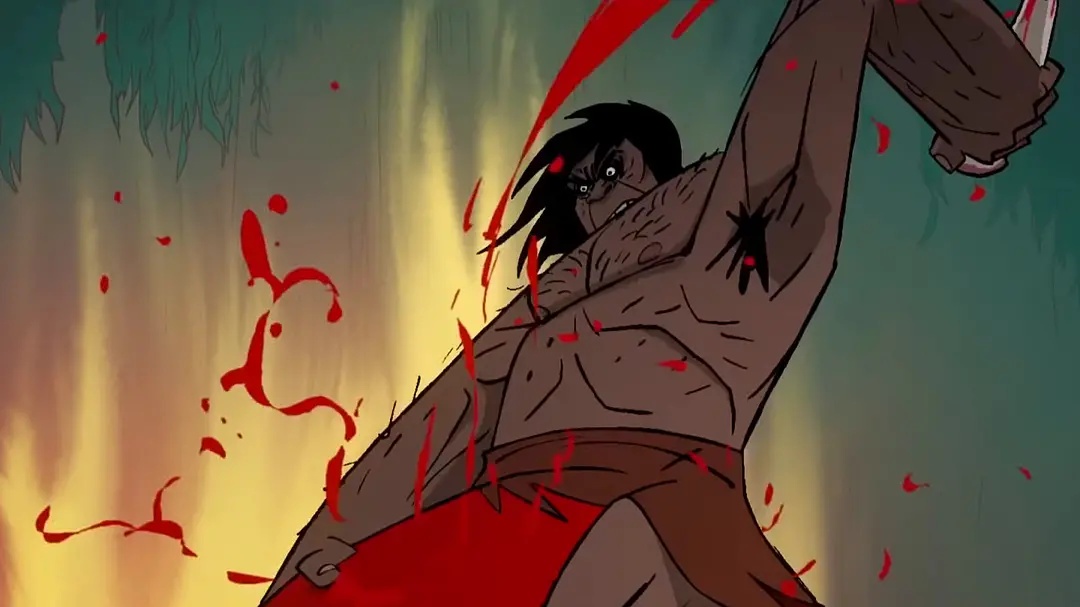 What is more, the show offers some contemplative moments: Tartakovsky lets his characters travel, track, recall the past or wonder about their surroundings. All this, thanks to the lack of words and focus on evocative images and simple sounds, make the narration raw and effective. Most of the journeys, though, take place between all of the first season’s five episodes, as each one of them shows the heroes appearing in completely different locations with varying weather conditions. Moreover, we never know how much time has passed from the previous adventure and the present moment, but with new places always come new creatures, both historical (obviously, mainly different types of dinosaurs) and purely fictional (e.g. gigantic monster-bats that make the fourth episode a true horror story). Some animals appear just for a moment and then never come back which only emphasizes the richness of the presented world, and captivates the audience even further.

The permanent fight for survival, albeit strictly pertaining to the primordial context where death was commonplace, suggests that violence is as natural an ingredient of our reality as the air itself. With the exception of some dark and brutal rites seen in the fifth episode, the acts of violence are justified. There is no exploitation of other beings — which was something developed by human civilizations centuries later — and there is no moral distinction between the good and the evil, as we understand it today.

The best example of such ambivalence comes with the surprisingly sad third episode in which we observe an old mammoth that has lost its herd during a blizzard. Wandering alone, the animal is suddenly attacked by Spear and Fang. The heroes are incredibly merciless, ready to do anything to kill the huge prey, which makes them look like the cruel antagonists. But, obviously, they just need its meat and fur to survive. Furthermore, the moment of its death is also complicated by the remorse appearing in the expression of Spear. They did what they had to do, even if that is ugly.

This ambiguity is the quintessence of the show which is simultaneously ferocious, bleak and touching. Despite the simplicity of the plot, Tartakovsky convincingly presents the complexity of human nature and that of the world that surrounds us. He underlines the necessity of violence, while always remembering to show its terror. The story of the unexpected friendship is defined by honesty as the Russian animator seems to really love (and care for) his characters. And that is what makes Primal beautiful. But be warned — it will break your heart.

Primal is available to stream on Adult Swim now. Check out the trailer below: