Director Peter Strickland’s latest feature In Fabric follows a cursed dress as it passes to various unsuspecting owners, terrorizing them day and night and ultimately destroying their lives. If you’re thinking that this sounds like the kitschiest horror film plot in existence, you’re right – and that’s exactly the point. Set in the 1970s, In Fabric embraces the natural kitsch of the era’s horror with its retro cinematography, and with a synth-y score similar to the one employed in David Robert Mitchell’s 2015 horror masterpiece It Follows.

Viewers first meet Sheila (Marianne Jean-Baptiste), a quiet but likeable bank teller who spends her free time either scouring lonely hearts ads in the newspaper, or cooking for her adult son (Jaygann Ayeh) and his openly hostile and apparently nymphomaniacal girlfriend (Gwendoline Christie). In preparation for a first date with a man she met through the paper, Sheila visits a local department store which, unbeknownst to her, seems to be run by a hilariously creepy old man and his horrifying cult of evil, sentient sex mannequins. One of the saleswomen/evil mannequins encourages Sheila to try on a beautiful, one-of-a-kind red dress. It fits her perfectly. Convinced by the sales-mannequin that this dress is the solution to her problems, Sheila buys it, thus ensuring her own eventual demise – this overt critique of consumerism dominates the first half of the film. 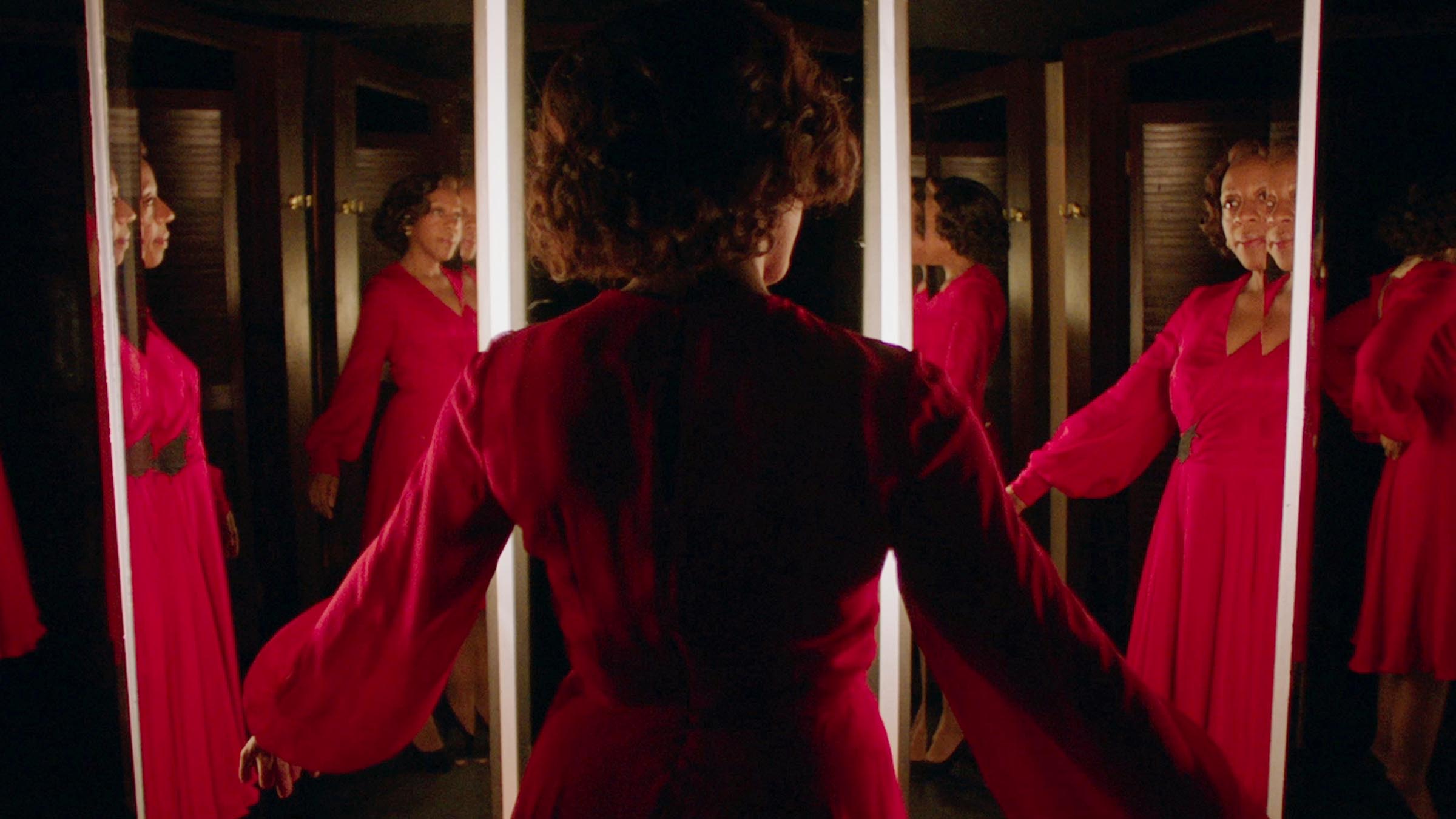 Next, the dress finds itself in the hands of Reg (Leo Bill), a pathetically passive washing machine repairman, and his fiancée Babs. This is where the plot starts to lose itself. If viewers thought they understood the rules of this filmic world after the first half of In Fabric, they were firmly disproven in the second half, where the film’s avant-garde, disorienting style takes precedent over any semblance of a cohesive storyline. At his stag party, Reg’s “friends” bully him into getting too drunk and wearing the red dress at a crowded dance club, which an unhappy Reg does practically without protest. This seems like an opportune moment for Strickland to examine the concept of masculinity in crisis and its relationship to consumerism, but instead, viewers get a lot of confusing sequences. For example, Reg for some reason suddenly demonstrates an ability to hypnotize people with his descriptions of what is wrong with their washing machine. Just like that, the film loses any of the traction or narrative tension initially built up by Sheila’s story and leaves its audience baffled. The campy absurdity of the first half of the film quickly becomes tiresome in the second half as viewers’ natural desire for a comprehensible storyline and logical filmic world goes unmet.

Peter Strickland’s vision is fun to watch and is aesthetically exciting, but viewers expecting some kind of enthralling story or provocative allegory found in any horror classic will ultimately be disappointed by In Fabric. While the heavily stylized cinematographic style and retro score are incredibly well-done, the film’s lack of closure (or even just a clear idea of what happens) will have moviegoers leaving the theater with one thought: “Well, that was weird.”

In Fabric will premiere at the BFI London Film Festival on October 18th. It will be coming soon to Curzon cinemas. Check out a clip below: