xinyiwang715@gmail.com Leave a Comment on Ten Perfect Shots From The Grand Budapest Hotel

Editor In Chief Xinyi Wang looks back at Wes Anderson’s iconic aesthetic in his much loved 2014 adventure comedy.

It is a justified statement, to believe that Wes Anderson is most famous for his signature composition style and visual character. From pastel colours to centre framing, his strict use of symmetry and sharp but quirky designs throughout his filmography have quickly branded itself to be the ‘Wes Anderson Aesthetic’. The Grand Budapest Hotel, an effortless delight of a film, perhaps, is the ‘Anderson Aesthetic’ at its peak. Anderson, working with frequent collaborator and partner-in-crime Robert Yeoman, offer a myriad of perfectly composed symmetries in each and every shot whilst playing with not only a set palette of pastel pinks, purples, reds, blues, and browns but also three different aspect ratios – a single viewing is enough to permanently press its visual presentation into memory.

When almost every shot is so intricately designed, it is surely hard to identify a single perfect shot from the film. So instead, we attempt to limit that down to ten. Disclaimer: This is done in no respective order, and no disrespect to any shot that did not make the list.

1. The First Establishing Shot of The Hotel 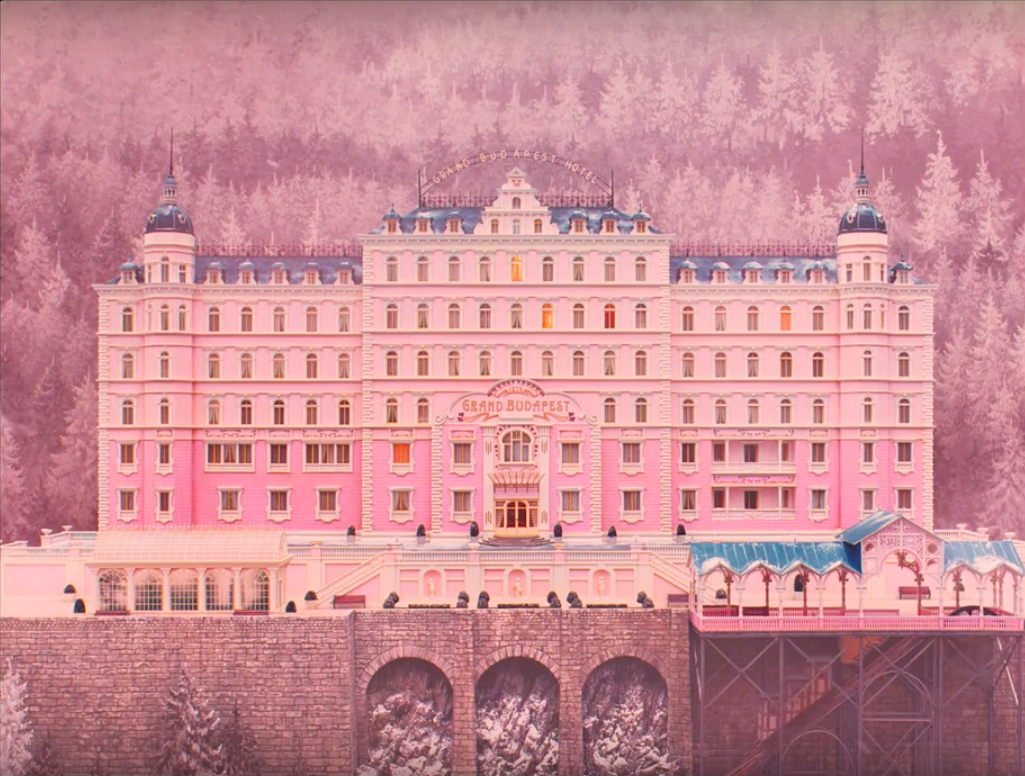 The most iconic establishing shot of the film, its picturesque pinkness immediately makes a strong impression. This is the hotel in question. It’s a product of its time (especially presented in 4:3 Academy Ratio), it is majestic and luxurious, and as we wait for the tram to ascend up to the hotel, Anderson sets the scene, allowing his audience to absorb and appreciate its striking design.

2. Zero and the Writer at the Dining Hall

The only 2.35:1 wide angle shot of the list, this shot is particularly wonderful for its quietness and emptiness. The hotel has deteriorated over time, Anderson reminds us, and that its grandness is only history. Upon closer inspection, it exudes loneliness – not all tables are occupied, and those that are only has one diner each. A soft spotlight descends on Old Zero and the Young Writer centre-bottom, composed of course, in Anderson’s strict style of symmetry. 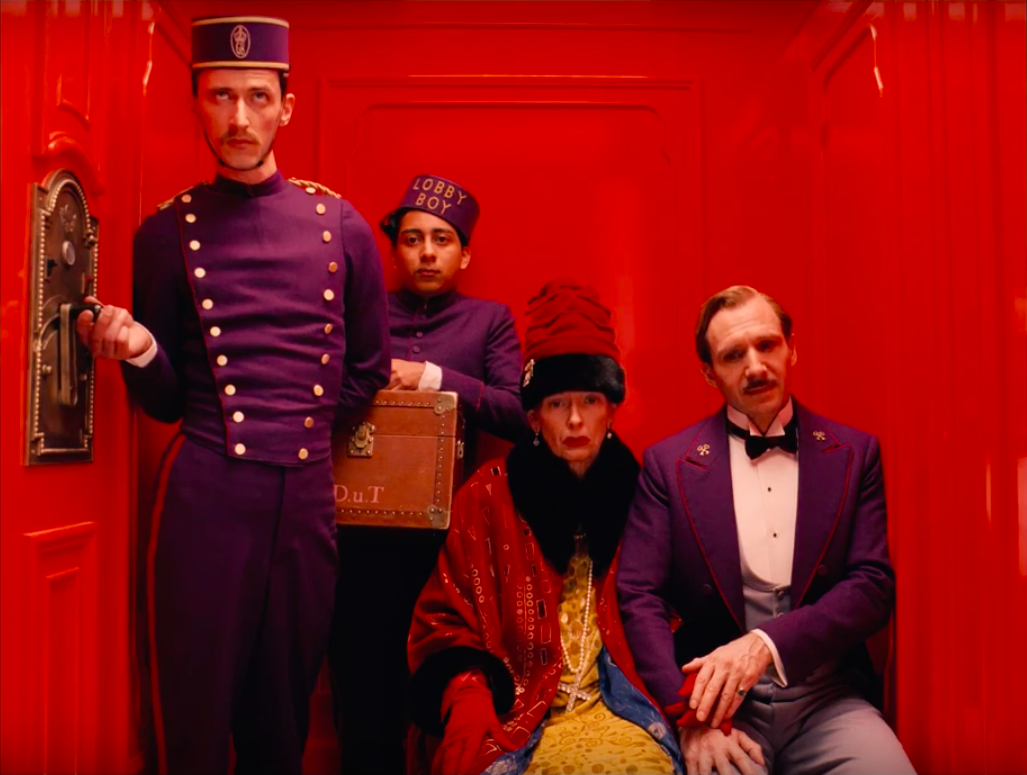 Awkward escalator shots such as this are sprinkled across the film. Saturated in red, our characters are crammed into the shot, amplified by the academy ratio that precisely fits the size of the lift. Zero is especially crammed in the back in this particular shot, giving the entire scene a claustrophobic undertone.

4. Gustave and Zero: An Introduction 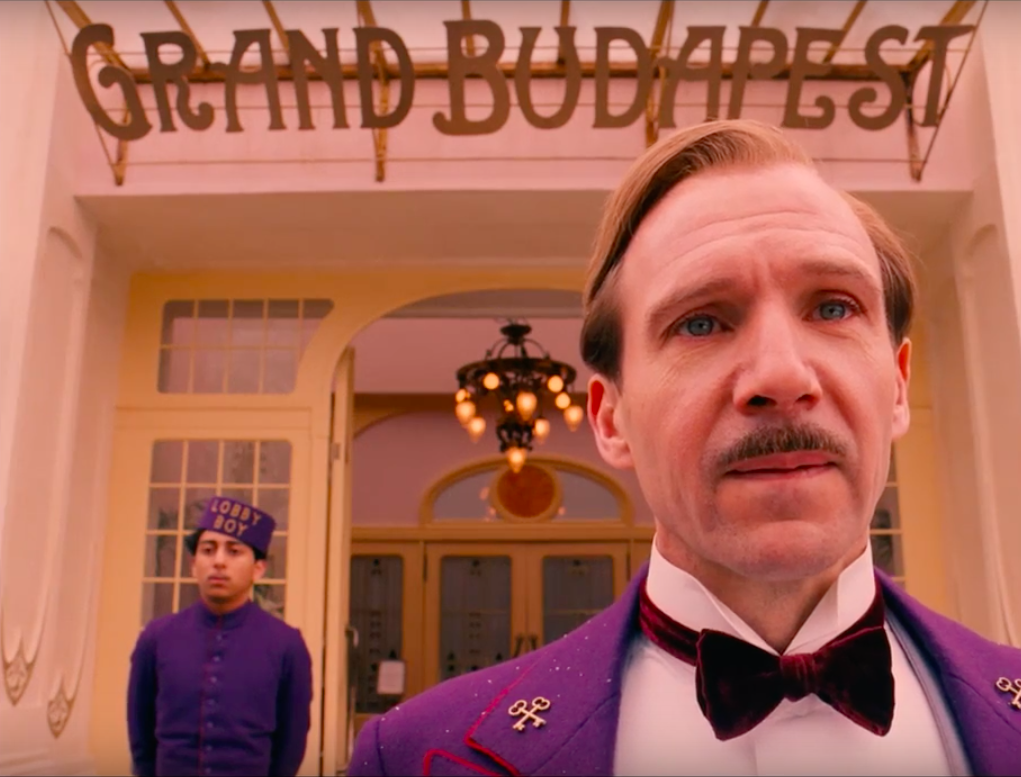 We meet our characters: M. Gustave and Zero. Its composition is wonderful – a fish-eye close-up of M. Gustave, Zero slightly blurred but nonetheless still visible in detail, and the sign ‘GRAND BUDAPEST’ looming above. A shot with physical depth that introduces and encapsulates what the film is about, our main characters make their first proper interaction. 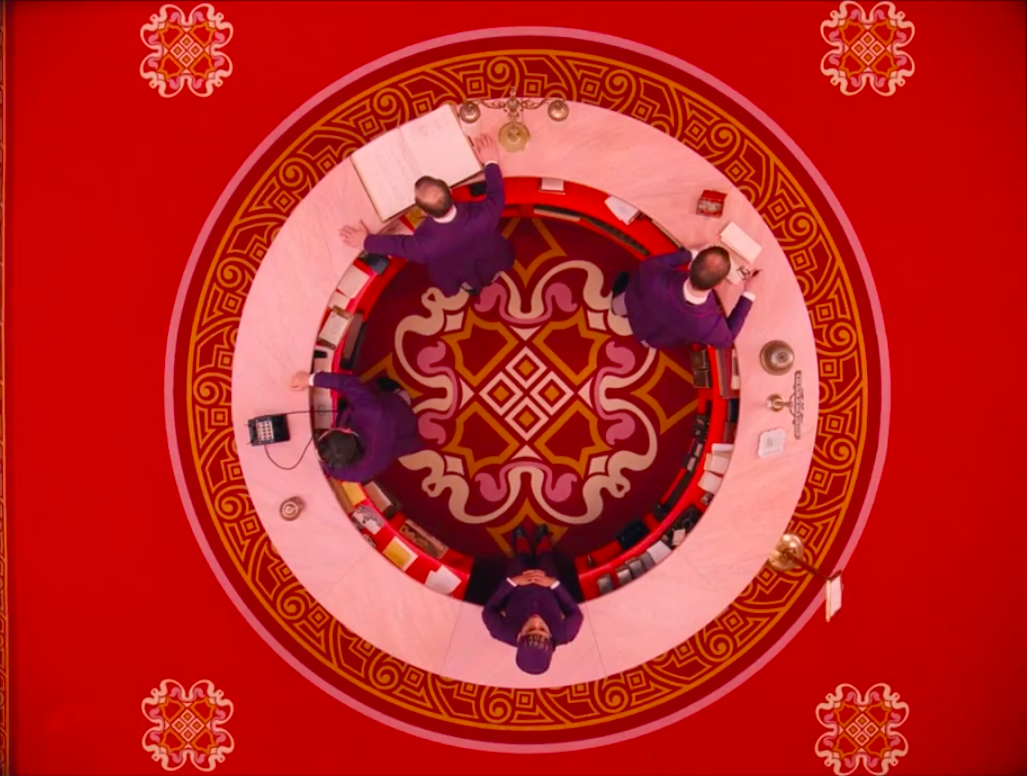 There are many bird’s eye shots in The Grand Budapest Hotel, but this one metaphorically and literally takes the cake. Anderson’s use of symmetry and geometry turns the hotel concierge into, basically, a cake, with circles and circles of layered patterns that is reminiscent of the Indian Mandala pattern. The shot certainly does not last very long, but it is representative of the amount of detailing that went into the composition of each frame and is effective in communicating the busyness of the hotel in its prime. 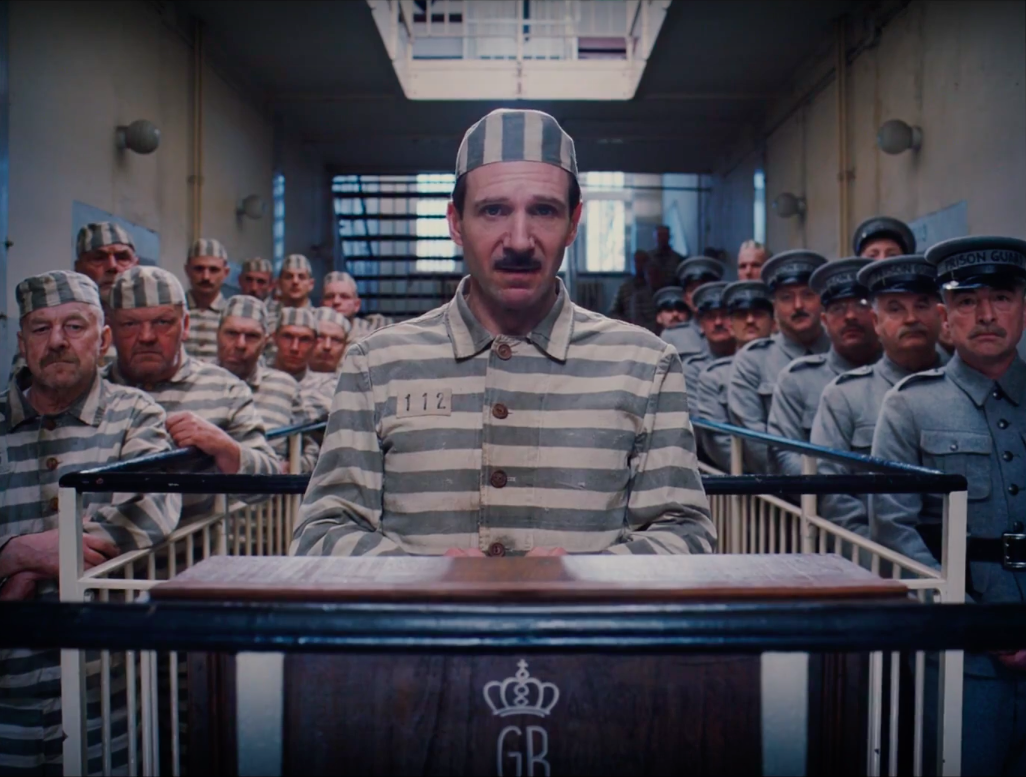 Once again, Anderson’s use of symmetry is marvellous. We have our subject, Gustave H., front and centre of the frame, and the background behind him is lined up with people separated by uniform. It echoes a previous shot of Gustave giving a speech to the hotel staff during dinner, and plot-wise it serves the same purpose. However, in addition, this call-back induces humour – it is already ridiculous (and in character) that Gustave insists on giving his speech, but the tidiness of everything and how inmates and officers both seem to be like his staff tops it all off. 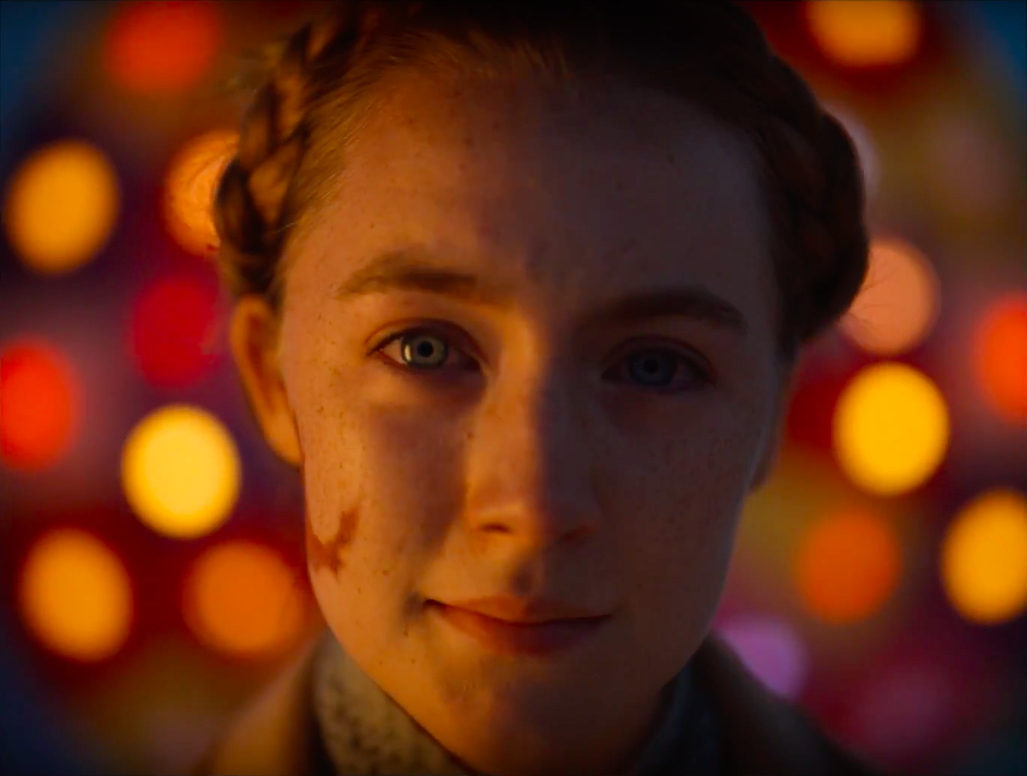 This one will always be an all-time favourite of mine. Saoirse Ronan’s Agatha, now properly introduced, stares into the camera in a close-up as the background shifts out of focus and spins. It captures Zero in love. It captures Agatha in love. Simplistic, romantic, intimate and beautiful, it also stands out for being so visually different from the rest of the film for its use of warm lighting, shadows, and soft lines, referencing itself as a special one. And it is. 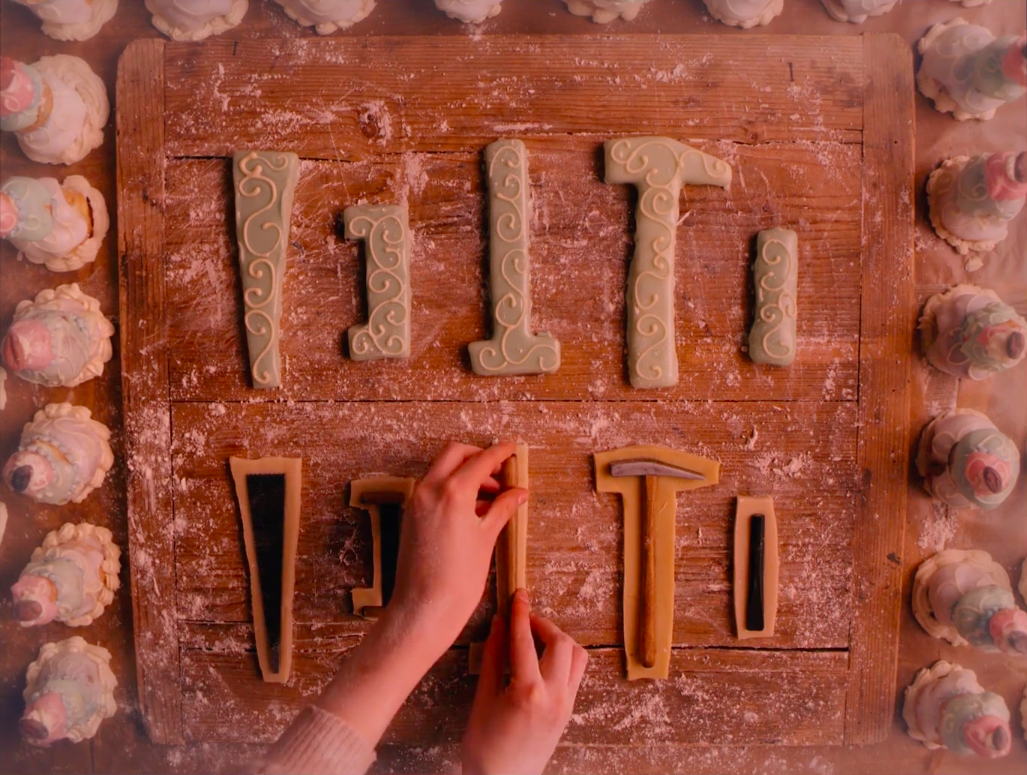 Another bird’s eye shot, this one is all fun in its sweet, pastel goodness. It is the signature Anderson aesthetic, finding its quirkiness and humour in hiding small tools in pastry with perfect composition and pastel tones. Not much needs to be said. 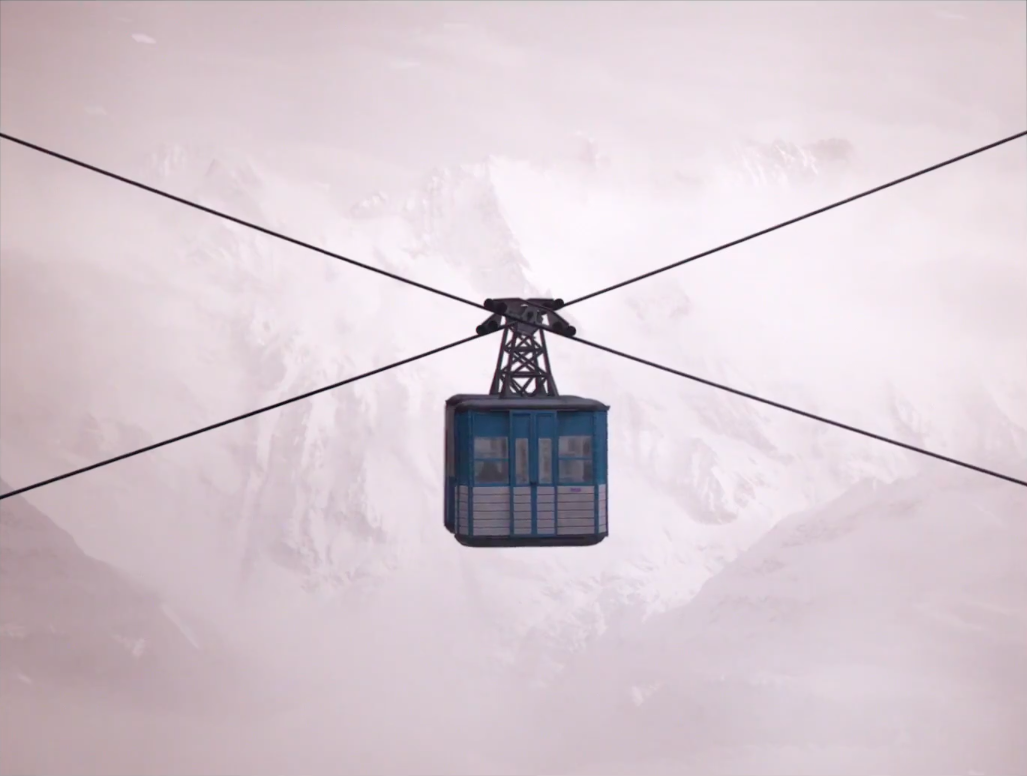 One of the few stop-motion sequences of the film, two cable cars overlap in the centre of the frame. Shots like this are aplenty in Isle of Dogs, but it does stand out in its predecessor. It is a clean shot, but hints danger – our characters are after all, on the run, suspended mid-air, carried by nothing but a tin can that is carried by nothing but a line. A moment of suspense, we watch as the second car approaches. Snow falls. 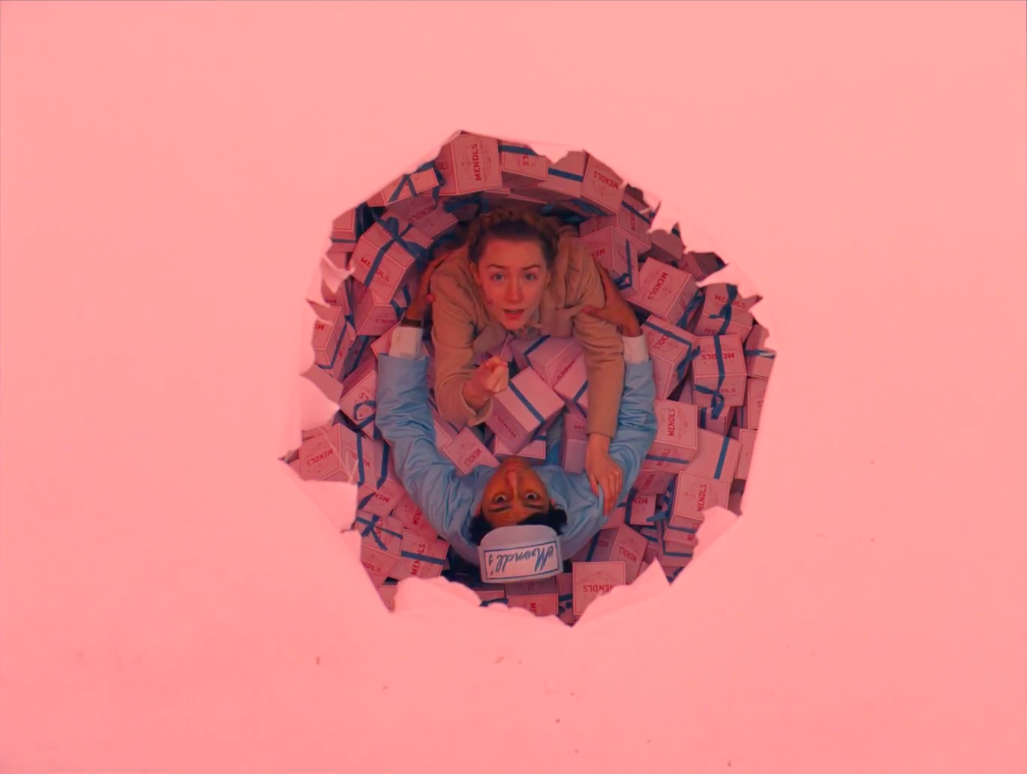 There is another shot from the same scene, and the decision between which one is better was a hard one to make. Honestly, if I didn’t care about being repetitive, both would make the cut (honorary mention to this shot as well). This one’s just slightly a bit more perfect. The third bird’s eye shot of our selection, the negative space of pink surrounds our characters as Agatha and Zero look up from the car, staring straight into the camera. Within the small positive space that they have, they are engulfed by a sea of pastel pink Mendl’s boxes, the pink and blue complementing each other in this aesthetically pleasing shot. It is a moment of resolution, a moment of fresh air. And similarly, this minimalist shot is satisfying in itself.

The Grand Budapest Hotel is FilmSoc’s first screening of the year. It will be screened on Monday October 8th, at 6pm. View details here and check out the trailer below: