Grey is a dull colour. It connotes the industrial and the ascetic, a lack of character and concrete emptiness. It is rarely striking, instead a kind of paste, a middle-ground between dark and light but never so stark as either. A grey day is miserable and uninteresting. A grey tone suggests a slowness, or an emotionlessness, or a bureaucracy. The modernist cinema of Antonioni or the realist cinema of the British kitchen sink directors often relied on grey to create mood, but the mood was ever bleak, ever dour. Black and white cinema tends to rely on contrast to contradict a greyness; they called it the silver screen to avoid that dusky alternative. But Zhang Yimou, master of the vivid and bright, has crafted a grey film. Every element of the production design sits between charcoal and white smoke; clothing, scenery, weaponry, and décor. A real-world desaturation, mired in constant rainfall. This is far from the vivacious crimson of Raise the Red Lantern and the lush greens and blues of Hero, and yet equally arresting. Zhang’s artistry is incredible in its detail, every element in step with the next – before the film has even begun he has exhibited one of his crucial cinematic talents: the ability to create a world most unlike our own, grant it an internal consistency, and inhabit it with some myth or legend of his own devising.

This colouring, or decolouring as it might be considered, threads into this legend. Zhang imagines a world where the shadow and light of Ying and Yang have merged, where motivations and intentions become unclear, loyalty and betrayal overlap, where masks fall, then fall again. It opens in the royal court of Pei, a kingdom that has been humiliated and supplicated by the neighbouring Yang. The city of Jing had been lost, but the king now seems weary and unwilling to take it back. He prefers a delicate peace, ensured by an uneven alliance with their once-enemy. In this fractious court is Commander Yu, a jingoistic war hero who seeks to face General Yang in single combat and regain Jing in his victory. A straightforward arc, only that this is not the real Commander Yu, but his ‘shadow’. The actual Yu resides hidden behind the court’s walls, sick and dying; he has sent a double to take his place, his wife supporting him in this scheme. 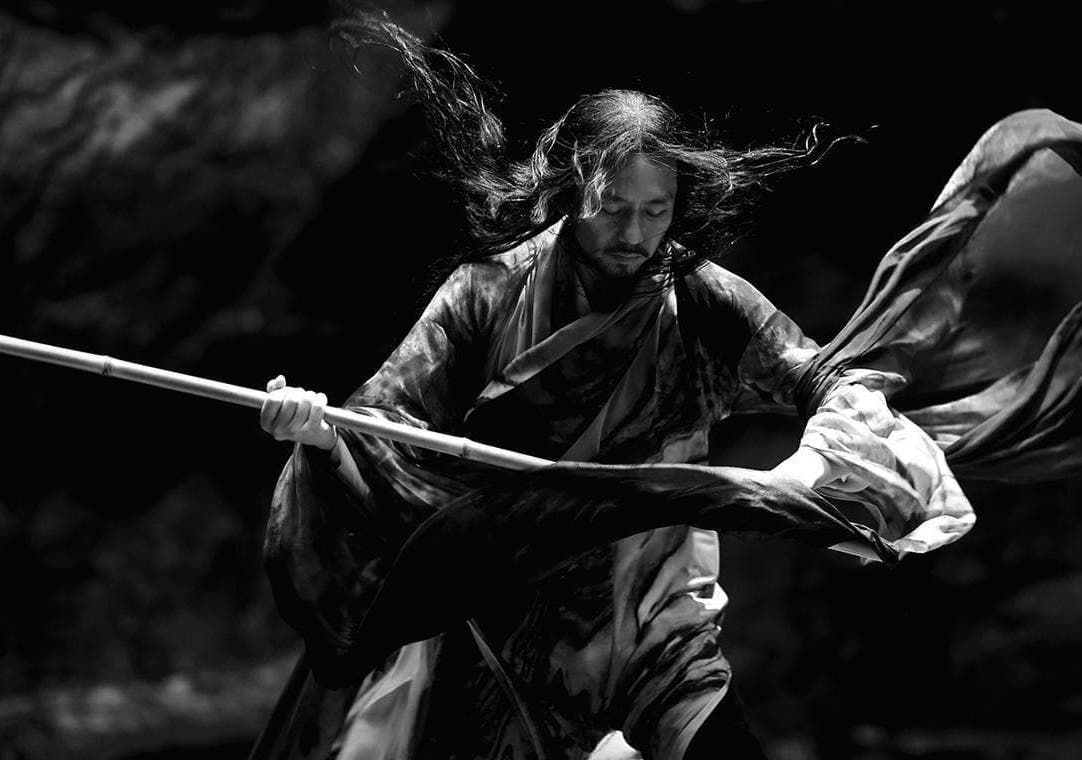 Already, a duplicity begins to emerge, a maze of motivations intertangling beneath a more typical wuxia story. As has become especially prominent in recent cinema – and especially at Venice, between The Other Side of the Wind, Vox Lux, American Dharma, and Sunset – Shadow (影) exists in a marsh of fiction, but a fiction that eventually consumes truth, twists it into a new thing. Yu’s double slowly begins to inhabit the original’s role and position, replicating his actions and his emotions. Yu’s wife becomes unsure of herself, lost between the real Yu and a double that more accurately represents the man she once loved. The film ends at the confluence of these anxieties, and while it becomes a little convoluted it also permits a degree of curiosity that the rest of the film – entertaining though it is – generally resists.

This entertainment is again wrought from Zhang’s absolute command of craft. He imbues his fight scenes with an element of grace that only the very best of wuxia cinema can achieve: his use of slow motion is essential, punctuating the rhythm of a battle and permitting a lingering eye on the physical beauty there displayed. The choreography is more like dance than what passes for combat in most western cinema, intricately and beautifully performed; bodies pushed to their physical limit, witnessed in the soak of a rainstorm. This is then accentuated in typical style, through wirework and CGI, though Zhang restrains himself a little in these areas, particularly against his more recent filmography. Wires are used to emphasise jumps but not to create the mythic duels of Hero, preferring a (relatively) more grounded approach. CGI, too, is held back by set pieces that are a little more restrained. The hail of arrows or gust of leaves that look so plastic in Hero are absent here. The exception is a landslide-type set piece of such brilliant audacity that it is difficult to critique in any technical sense – even describing it would be an indecipherable folly. 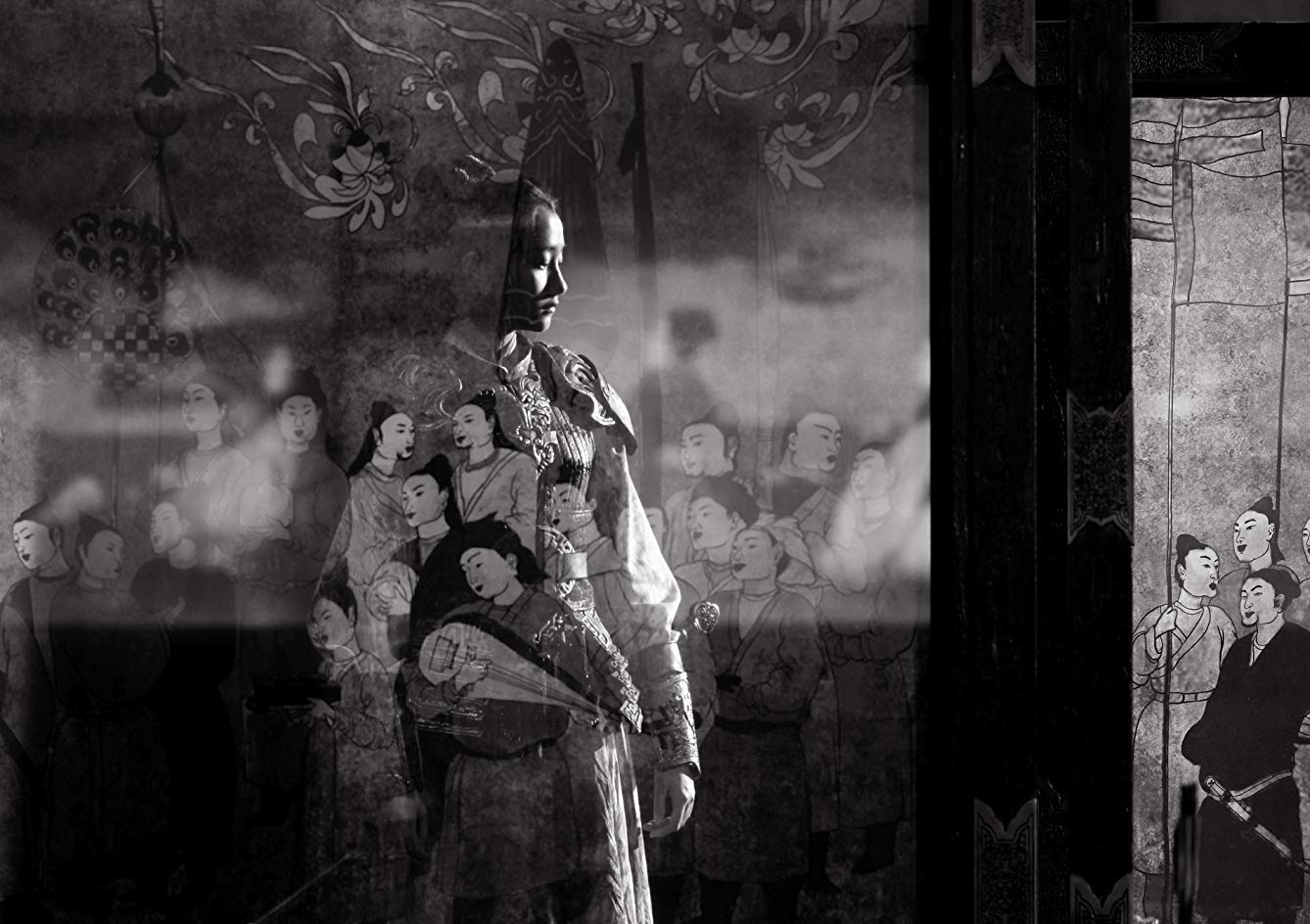 These battle scenes are also imbued with more precise filmic detail. The editing builds tension through effective crosscutting, one moment coupling a musical performance to two simultaneous duels, a kinetic camera exploring each of these scenarios with vigour in turn. The music itself is also excellent, using the jolting chords of a guzheng and guqin to pace both the quieter political scenes and the raucous battle. The wider soundtrack has a similar impact, with spluttering arterial spurts and generic weapon swooshes providing an aural impact to the choreography in motion, which is further enlivened by the ceaseless pelting of rain. The sum of all this is not something that resembles reality, but it is in this unreality that wuxia and Zhang best operate. This is given a new dimension by the film’s own thematic direction, in which everything seems to be an imitation or contradiction of something else.

It is a little unfortunate that much like Hero, Shadow must also falter under its narrative. These characters might be legendary tropes, but they, and many of their stories, still feel contrived. Events must take place for the story to develop, rather than events that take place because of the developing story. There are also a few too many ‘gotcha’ moments, the kind of expositionary explanations offered by a victorious schemer after he has successfully fooled his mark. Instead of declaring and explaining exactly what they know, how they knew it, and why they acted on that information in the way that they did, characters could instead simply act in a way that makes all those facts implicit. For the obvious spy in the court to be outed as an obvious spy does not then need a narration on the exact uses of a spy who is obvious, to cite one example.

But for its deficiencies in writing, Zhang still presents and exceptional visual experience. His world is built with such consummate talent, his fight scenes choreographed with a rare eye, his set pieces so outrageous they become surreal. Certainly not Zhang’s best or most graceful film, but another solid entry to his enviable canon.

Shadow will have its UK premiere at the BFI London Film Festival. Check out its trailer below: