It has a name like an Emily Dickinson poem, and At Eternity’s Gate covers much the same territory. Following Van Gogh at the end of his life, it muses on the beauty of nature, on loneliness and alienation, and on the great beyond. It is fashioned much like the work of Terrence Malick, featuring a flowing camera drifting about forests and fields, characters circling each other as they speak in vagaries, and the occasional voiceover linking together an elliptical cut, set to leap ahead at any moment or fade to a sudden black. It is most unlike last year’s Loving Vincent, a film that covered a similar ground (albeit from the reverse angle). That film, while astounding in its making, is flat and simple in script – a work of fine artistry, but mediocre art. At Eternity’s Gate might be the opposite, always artistic, but perhaps a little looser at the seams.

It flourishes best when set in the nature Van Gogh so loved. The colours saturate, the film stock grows grainy, the camera peers up and through the trees. In these moments we are not told that Van Gogh loves nature: we feel it. Set to French impressionism or minimalist piano, we follow him into the wilds. The camera rushes through the yellows and greens, enjoying every moment. Shots from Van Gogh’s point of view are altered further, with the lower half of the screen defocused. This represents his manner of seeing the world, a certain distortion, a blurriness that might be detected in his landscapes. By no means an effect meant to replicate his work, it is instead a suggestion of subjectivity, a leaning toward the supposition that we all glimpse the same nature in different ways. These moments of happiness seem almost unusual, with the image of Van Gogh so often associated with the mood of his drearier works (the titular oil painting especially). Cinematically, said mood also prevails: Loving Vincent viewed the man in a sombre retrospect, and Maurice Pialat’s 1991 biopic also saw little room for levity. This may not be a happy film, but it is not one bereft of happiness. It does not lose yellow for blue. 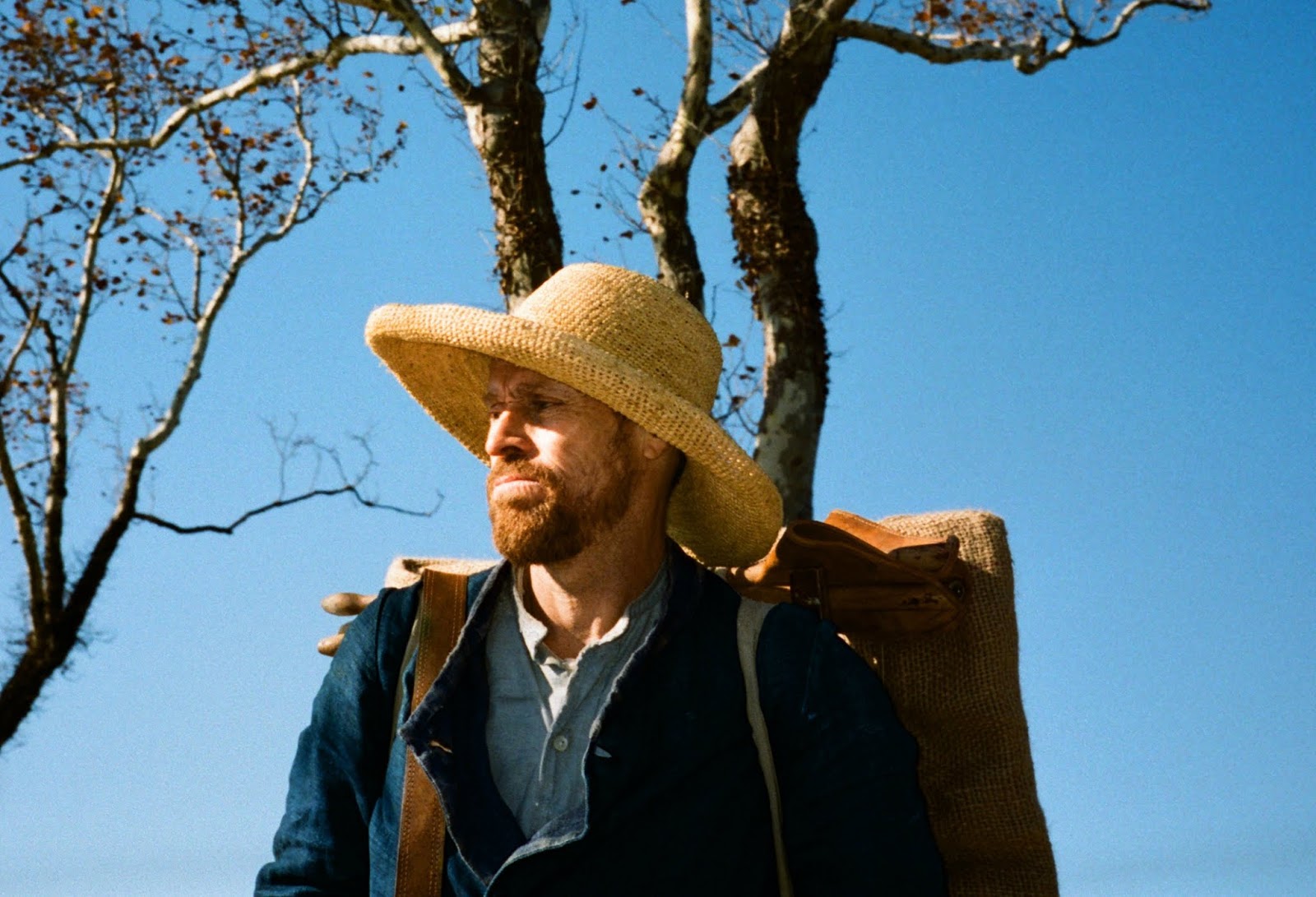 Slightly less accomplished are the scenes structured around dialogue. These differ formally in their more restrained nature, and will often be conceptually focused, with Van Gogh explicating some belief or other and being fenced against by an interlocutor of some kind. Most often this will be Gaugin, who initially rejects Van Gogh’s obsession with painting the real and the seen. He prefers painting from the mind, abstract, indoors. Van Gogh’s argument is that painting the scenery is just as internal, as it is less the trees of France that he paints than the trees of his mind’s eye, different from any other. These conversations are often interesting, but do occasionally risk straying into the academic. It seems almost ironic that Schnabel frames these lengthy discussions about feeling over thinking when he has already evidenced his ability to do so through visual prowess alone – a sense of redundancy drips into shot. This is made worse by the occasional habit of repeating dialogue – though that is in part a representation of Van Gogh’s suffering mind – as a line that, said once, might sound true or wise risks pretentiousness when echoed; and pretentiousness is a fate this film narrowly skirts at some points.

But then the film will grasp back with something more physical, something direct. Van Gogh’s struggles with reality are portrayed viscerally through the camera, often tilting and panning as if to somehow understand better its subject. Dafoe’s performance is expectedly impressive, managing to capture both the spark of genius and the blaze of discomfort at once; he seems always to be teetering, bar when among the trees. His cognisant discussion with a priest best fulfils this feeling, with his insights on life and art falling disturbingly close to his personal comparisons with Jesus; in this conversation he seems both to drift in and out of lucidity, aware of his madness in a way madmen are not supposed to be.

If beset occasionally by structural shakiness, At Eternity’s Gate is not a film obsessed with plotting or pacing. It prefers to drift, to glance at branches and listen to the impossible music on the wind. It understands Van Gogh and his paintings – better are they experienced in three dimensions than Loving Vincent’s two – and displays his person through snapshots of his final days. Small insights and revelations often avoid formative moments altogether or approach them indirectly. It is a film of visual beauty, a grasp to understand a great artist on his own terms, rather than breaking down his character and analysing the pieces. It is here that it differs most from Loving Vincent, a film that sought to present Van Gogh as a mystery to be solved, puzzle pieces that belong together. There we look at him, here we look as him.

At Eternity’s Gate had its world premiere at Venice Film Festival on September 3rd, 2018. It has yet to acquire a UK release date. Check out its trailer below: