A young couple is on their way to the guy’s parents’ house. They’ve only been together for six weeks. Or is it seven? They’re unsure. Nothing is certain, not even her name; it’s Lucy, or maybe Louisa, it might even be Yvonne. This is their first roadtrip together. She says they have a “real connection; a rare and intense attachment” – but the conversation is awkward, stilted. He’s excited for her to meet his parents. She hasn’t even told hers about them. He’s clearly aching for them to be perfect for one another. She’s thinking of ending things.

Are you confused yet? If not, you will be. Charlie Kaufman’s latest feature, i’m thinking of ending things, is his least accessible yet, embracing the writer/director’s absurdist style and philosophy to an extent that only Netflix’s infamous do-whatever-you-want policy would have allowed. I don’t necessarily mean that as an insult, perhaps just more as a warning to go into this expecting something uniquely Kaufman-esque. 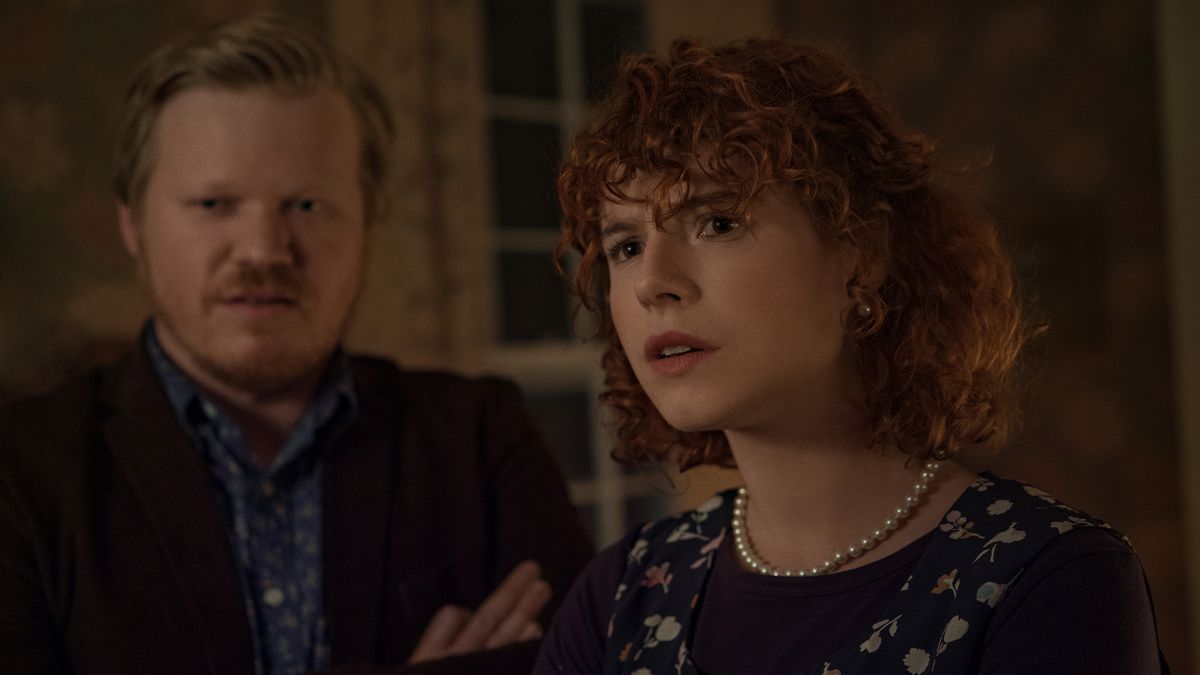 The film’s emotional bedrock is uncertainty, especially in the first two acts. The film occupies itself with those uncomfortable stretches of time plagued by apprehension; waiting for someone you’re nervous to meet to finally descend the stairs, a car trip with a boyfriend you’re thinking of dumping, approaching a table full of people who are clearly waiting for you. Kaufman elongates these moments and drops us squarely into them, slowly creating an atmosphere of tense anxiety that sinks its claws into you, making it impossible to turn away. The intricately confusing wallpaper backdrop of the opening credits resembles something along the lines of what Charlotte Perkins-Gilman described in The Yellow Wallpaper, suggesting from the very outset that nothing we see is to be trusted.

Indeed, every detail seems to shift constantly. It’s not only the young woman’s (Jessie Buckley) name that changes, but her major, the colour of her coat, how she met Jake (Jesse Plemons), how she feels about him, even her voice and face. These shifts are occasionally subtle, and occasionally glaring, challenging us to question them. The world around her changes too. Kaufman takes a very literal interpretation of eternalist philosophy; Jake’s parents (Toni Collette and David Thewlis) appear at different stages of their life almost simultaneously, and the young woman feels nostalgic for things that have not yet happened. Things characters say and do are taken wholesale from notable public figures, from the criticism of Pauline Kael to the paintings of Ralph Albert Blakelock, spoken and presented as though completely, spontaneously original.

The film’s litany of references seems to be one only the most cultured intelligentsia-type would feel comfortable peppering in, or more accurately, the kind of person who desperately wants to be one of those cultured intelligentsia-types. The kind of person who corners you at a party, purely aesthetic cigarette in hand, starting a conversation about the essays of David Foster Wallace, but inevitably ending up talking about the crushing shame they still feel about having only gotten a participation trophy at their secondary school prizegiving. 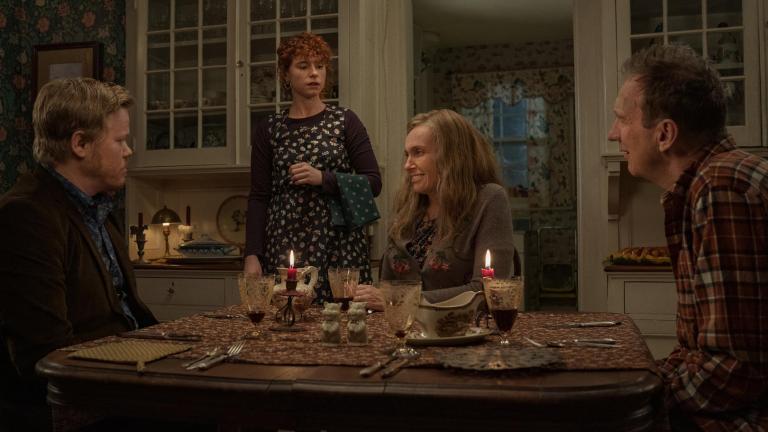 On the surface Kaufman seems to be making a fairly boring critique of the inauthenticity of modern times, the disconnect between our thoughts and our actions, our lack of original thought, something like that. But the further you get into the film, the more it feels like he’s deriding the kind of person who actually believes that such a critique is either pertinent or unique; the kind of person who needs to feel like the smartest in the room, a cut above the unwashed masses and their supposed disregard for “high culture”. The kind of person who oh so desperately needs their opinions to be validated that they’re incapable of connecting with the people around them. If you’ve seen anything else by Kaufman, you’ll recognise the pattern: he’s writing about himself.

If that seems like a lot to throw at your actors, well, it is. But the whole cast handles it fantastically. Buckley in particular effortlessly attunes her performance to every deviation in tone and character no matter how minor or major. Jay Wadley’s score and ballet is brilliant, shifting from minimalistic terror to uplifting wonder with an ease that makes me question why I’d not heard of him before.

Truthfully, i’m thinking of ending things is a difficult film. After the first viewing I found myself unable to decide whether it was a meaningful piece of art, or a wall at which everything had been thrown and few things had stuck. But I could not stop thinking about it, and desperately needed to discuss it. Once I’d had a chance to do so, and managed to formulate an interpretation that actually seemed to make sense, I found myself leaning more and more toward loving it and its wonderfully absurd, surreal terror. It may be a difficult film, but if you want to watch something that will stay with you, it is absolutely worth it.