A selection of our writers review and recommend their favourite horror films to add to your Halloween watch list. Check them out if you dare.

Fruit Chan’s Dumplings is the original Mukbang. The original cannibal Mukbang, that is. Originally released as one of the ‘Three…Extremes’, a collaboration between three directorial teams – Lilian Lee, Park Chan-wook and Bun Saikou with Haruko Fukushima – from three East-Asian countries – Hong Kong, South Korea and Japan, Dumplings was later released as a full-length feature after a positive reception from critics and audience alike. The film follows Mrs Li (Miriam Yeung) as she attempts to regain the attentions of her straying husband by purchasing a new lease of life. To do this, Mrs Li seeks the help of Aunt Mei (Bai Ling), who attributes her preternatural maintenance of the vitality and figure of a twenty-two year old to a special dumpling-consumption regimen. ‘Ick’ ensues, as a cacophony of audiovisual-clues reveal that something a little crunchier than spring onions is encased in the opalescent folds of dough. Reflecting on the disastrous consequences of criminalising abortion, Dumplings represents the best of social-realist horror, which has seen a welcome resurgence in the past year, with films such as Jordan Peele’s Us and Ari Aster’s Midsommar topping box offices. Put simply, this is not for the faint of heart, but a multi-sensory treat for anyone endowed with a strong stomach.

If you don’t watch this for the slow thrill, artful soundtrack, or X-rated erotica, watch it for DeNiro’s character’s innovative technique for peeling a hard-boiled egg: tap, tap, tap, crunchy roll. I can confirm it works really well and changes the game. And if that’s not enough, Christopher Nolan has also cited it as heavy inspiration for Memento.

Sam Raimi’s The Evil Dead is a deeply cool film. It wears dark glasses and a leather jacket, and listens to bands you haven’t heard of. It feels effortless. But, like all things cool, behind the veneer of indifference lies a great deal of hard work. Without much in the way of professional training between the entire cast and crew, Raimi & co. set out to create a fiercely imaginative film with all the debauchery and violence promised but never delivered by triple feature horror B-movies. The plot faintly gestures at the ‘kids stay at the evil cabin in the woods’ prototype, but it is a half-finished thought that steps aside fairly quickly in favour of blood, guts, and gore. Tim Philo’s intense, relaxed yet incredibly precise cinematography lets Raimi show off the incredible make-up and practical effects by Tom Sullivan, a novice who seemingly only ever worked with Raimi. The camera swings around and upside down, zooming along the ground as restless as the angered spirits. Throughout all of this, Bruce Campbell (and his chin) dominate the screen as he bleeds, screams and brutally massacres what remains of his friends. The Evil Dead is a riveting, fascinating experience which leaves you breathless, chuckling, and desperate to get out into the woods with a bucket of corn syrup and a gaggle of misfits. 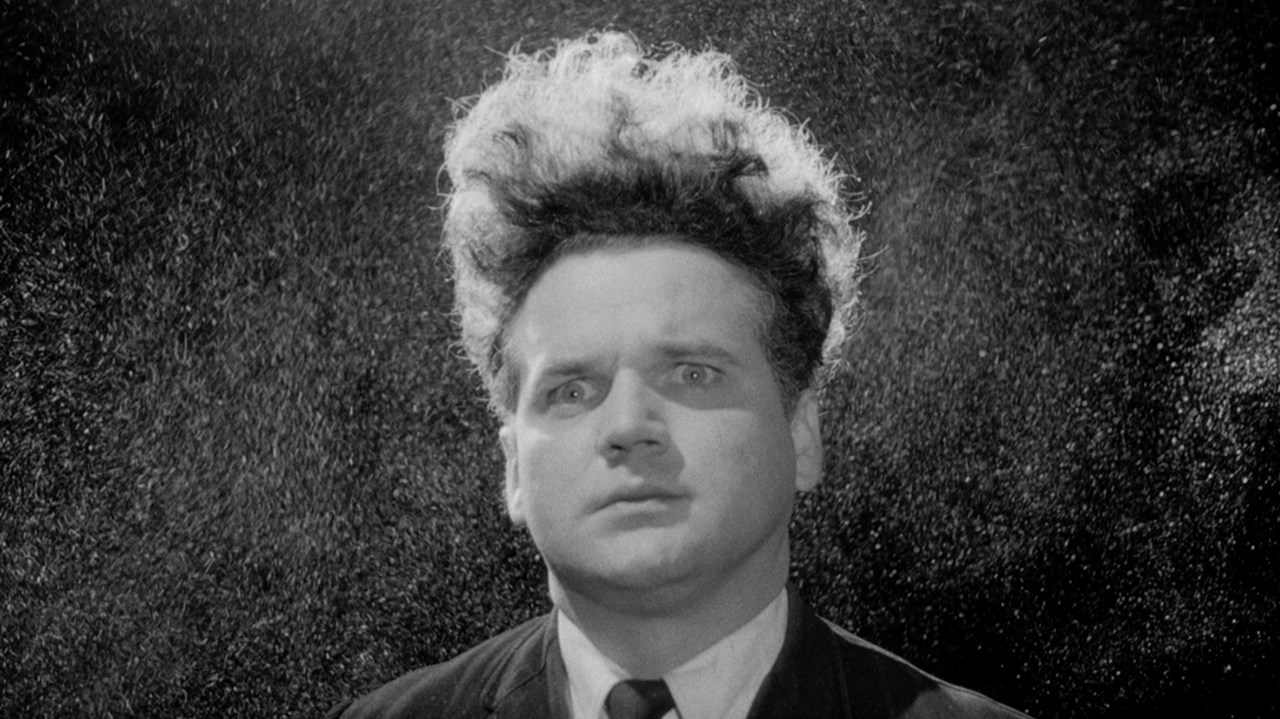 Surprise! Your girlfriend reveals she’s pregnant and gives birth to what looks like a reptilian demon-baby. We’ve all been there, and David Lynch’s 1977 debut film turned cult-classic Eraserhead revisits this relatable dilemma. Swap jump scares for low-grade dread by watching tall-haired Henry Spencer (Jack Nance) care for his baby’s inexplicable blisters; because nothing’s spookier than parenthood and the fear that your offspring will look like a fleshy sperm with nostrils. Drifting across the film’s monochromatic interiors, you’ll encounter a cadre of friendly faces such as the Man in the Planet (Jack Fisk) and Beautiful Girl Across the Hall (Judith Anna Roberts). My personal favorite is the Lady in the Radiator (Laurel Near), who grins and sidesteps with the delight of an older, deformed Shirley Temple. Put bluntly, watch this movie if you want to feel like you’ve been dropped into a sensory-deprivation tank and left there for so long that you lose to ability to distinguish between seconds and minutes, before and after, and what it’s like to have a body and have it move through space to meet a form of resistance that isn’t a wave or ripple; and to grip something hard, so hard that the solidity of the object presses deep into your hand and makes it numb or bloat or crumble; and to eat a tomato, to have a ripe tomato to pop and sink in your mouth like a loud vivid-red deflation; so that you can feel the film of the skin slide between your teeth and tongue and shred it into thin strips with the sharps of your molars, quickly, before you forget what a tomato is, or what eating is, or mouths are, or red, or words, or thoughts, or forgetting—

Described upon release as “instant junk” and “a wretched excess,” The Thing paved the way for visually repulsive horror (John Carpenter walked so Ari Aster could run!) onscreen. The film follows a group of American researchers in Antarctica who encounter “the Thing,” an alien parasite that can assimilate and imitate any organism. Once they realize any one of them could become the Thing, the group grows increasingly paranoid and frenzied, leading to a complete derailing of their mission. The film is worth watching for its special effects alone ($1.5 million of the $15 million budget was spent on “creature effects” such as rubber and food products), but isn’t for the faint of heart. In one particularly disgusting scene, the Thing bursts out of someone’s chest, bites off the arm of a doctor, and then turns into a disgusting spider creature. Equal parts horrifying and fun, The Thing takes everything you love about 80s movies and completely ruins them; kind of like Alien, but worse.