Alex Dewing Leave a Comment on ‘Dead Line’ Review: The Eerie ‘Inside No. 9’ Live Episode

The deliciously dark duo of Reece Shearsmith and Steve Pemberton, who over the course of twenty-three years working together have introduced viewers to the twisted League of Gentleman and the equally wicked Psychoville, enter new territory in their latest project Dead Line. If the first episode is anything to go by, the upcoming fifth season of the anthology series Inside No. 9 will continue to make audiences laugh and scream in equal measure. This episode may surprise viewers not because it was broadcast months ahead of the rest of the show, but because it is the first episode to be broadcast entirely live. As one could expect from the creators of a series that features a musical episode, a single-shot episode written in iambic pentameter, and an episode shot entirely through CCTV cameras, Shearsmith and Pemberton continue to tackle more and more audacious ideas, raising the bar both for themselves and for TV itself. Dead Line, by far the pair’s most ambitious, and perhaps most enjoyable, project to date, went off without a hitch (so to speak).

This episode follows Arthur Flitwick (Pemberton) as he seemingly communes with the dead through an old flip phone found in the local graveyard. In his performance, Pemberton invokes the old whimsy of his beloved Psychoville character Oscar Lomax. Stephanie Cole brings more farcical humour in the ditzy Moira, friend of the lost phone’s owner, while Shearsmith makes his entry as the suspiciously saintly Reverend Neil – unfortunately alongside a brief technical glitch leaving the audience without audio. 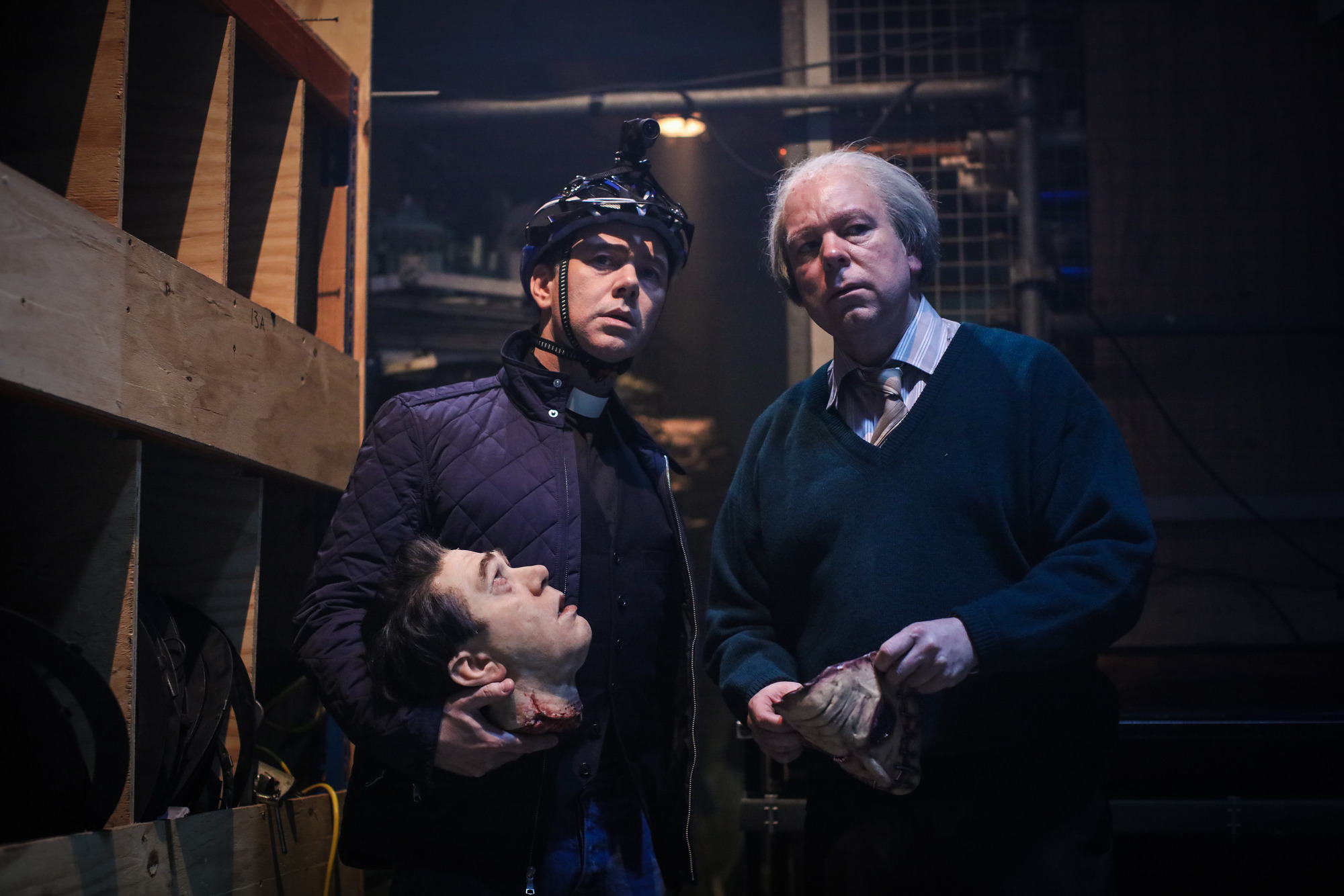 Sadly, this slight glitch was not the only one to occur on the night of the live episode:  as the transmission fell silent again a BBC apology placeholder appeared, the continuity announcer apologising for the “gremlins” in the system. A rerun of the popular episode A Quiet Night In was temporarily played as the sound issues were dealt with. The duo seems aware of how people are excited by such errors:  “I think that’s what people want to see,” Pemberton himself said to the BBC Media Centre. Few others would be as excited about the prospect of technical failings as these two. However, it is this understanding of their audience that allows them to create a brilliantly harrowing experience in spite of the issues that befell them during transmission.

By the time Dead Line finds its footing again, the audience is thoroughly engaged and it takes no time at all for the scares to start rolling in. With a variety of filming techniques – including voyeuristic CCTV footage and found footage-style scenes reminiscent of BBC’s 1992 Halloween mockumentary Ghostwatch – there is a depth to this very traditional horror narrative that compels you to carry on in spite of every fright. Dead Line’s scare tactics are scattered assuredly throughout the episode on a backdrop that is exhaustively seeped in an eerie atmosphere. It climbs and crescendos at an easy pace that only Pemberton and Shearsmith would have the confidence to attempt.

When asked before shooting if this episode would follow in the footsteps of The Trial of Elizabeth Gadge or The Devil of Christmas as one of the few episodes taking on period settings, Pemberton said: “[Dead Line] is going to be contemporary.” This assertion is a complete understatement; Dead Line feels as if it could only exist in our world, a world in which losing a mobile phone is comparable to losing a life (and a world in which fans are quick to turn to Twitter to sympathise or scold the team for technical issues). The episode’s surprisingly simple setup permits it to instead turn meta and find its scares in the audiences’ own technological anxieties – and with such flawless execution, what scares they are! Whether you’re a fan of Pemberton and Shearsmith or if this is the first time you’ve heard of the duo, Dead Line is a piece of TV that deserves a watch.

Inside No. 9 will return with its fifth series in 2019. Dead Line is currently available to view on BBC iPlayer.