Milo Garner Leave a Comment on London Film Festival: ‘They Shall Not Grow Old’ Review

Among the unruly film conservationist community – an elusive and underloved subsection of society at the best of times – there is much discontent afoot. Peter Jackson’s latest project, a commission from the Imperial War Museum to mark the centenary of the First World War’s conclusion, has been considered by some to be an act of barbarity, an unjustifiable marring of historical record for the sake of empty titillation. This project, entitled They Shall Not Grow Old, is understandably controversial: Jackson has taken archive footage from the Western Front and not only colourized it, but dubbed it with sound and rendered it in 3D. That’s not even to mention blowing up 4:3 to 16:9, often considered a sin in its own right.

The arguments against this kind of treatment are plentiful and not without merit, especially the suggestion that in making these images more ‘realistic’, one forgets that they do not necessarily represent reality at all. Not only is much of the footage used staged or in some way manipulated – what is off-frame is often more indicative than what is on – but also an artefact of how these historical people viewed their own present. To ‘enhance’ these images with tools of modernity might, in an extreme example, not be so dissimilar to colouring in cave drawings in order to make the horses more lifelike. While yes, that much would be achieved, it would also be a total distortion of the way in which early man perceived and recorded horses – it may seem more real to us, but not in any helpful way. 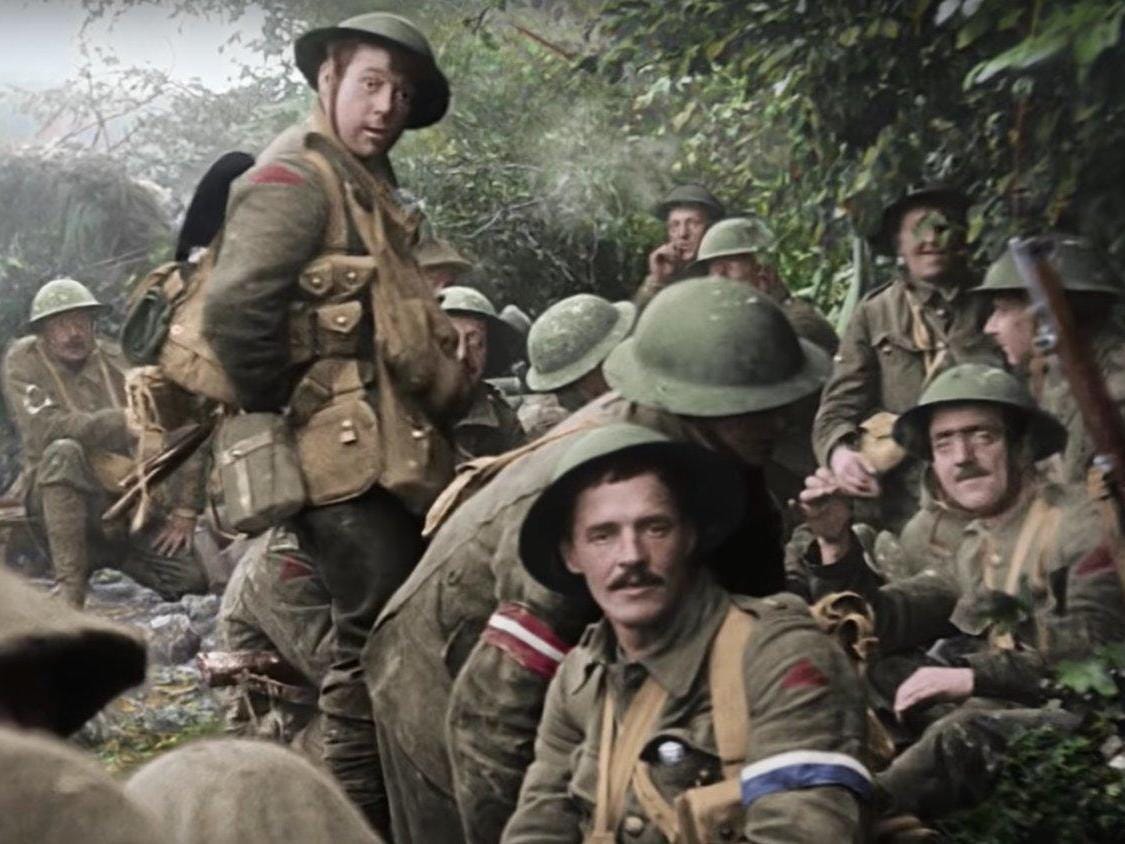 This angle, while entirely valid, misses the aims of Jackson in creating this film. He is not attempting to make better the images of his forefathers, but rather to use the data contained within those images so as to construct a fantasy that might, itself, communicate an idea of the First World War. Little of what Jackson presents can be considered ‘real’ – the colours are imagined, the sounds invented, the voices guessed at – but just like any costume drama set in the Great War, that does not stop these from being authentic. By adapting the indexical record of the First World War, which even if staged or manipulated is still constructed with genuine soldiers in genuine locations, Jackson can then inject this impression of the past with his own expressive interpretation. This is not an improvement of old footage so much as an attempt to use this footage in an essentially fictional recreation of the First World War. He wishes to recreate it according to the aesthetic of direct human senses – we see in colour, we hear synchronised sound, we perceive depth. So too did the soldiers Jackson wishes to depict, and through their eyes he attempts to see. This is, of course, impossible – therein lies the art of cinema.

But does it work? In large part, I think it does. Jackson opens the film with framed and untouched (besides the unobtrusive addition of mild 3D effects) footage depicting recruitment and preparation early in the war. As this leads into the fighting – he structures the film in a simplistic, linear fashion – the various effects sweep over the screen. The impact is at first startling; the distortion inherent in the footage met with image smoothing techniques, and occasionally garish colours, initially suggests the tone of 80s video footage, almost as though we are viewing some kind of re-enactment. But as the film continues the imagery becomes more consistent, and at once more intimate. This is not to say that black-and-white footage is inherently alienating; rather that to see these young faces laughing or speaking, smiling in impossible close-ups, is to imbue them with something lost in the limitations of silent documentary of the 1910s. It feels almost wrong – especially as a student of history – to suggest such a superficial (and fictitious) adaptation of old images can change their effect in any meaningful way. Then again it is that replication of the human sensory condition, and application of modern aesthetic sensibilities, that in Jackson’s own words ‘reach[es] through the fog of time and pull[s] these men into the modern world’.

Unfortunately this fascinating gambit lies in contrast to the worn-over and school-friendly structure the rest of the film rests in (albeit understandably, given a copy will be sent to every school in the UK). Every theme is covered individually, each given a few minutes, the course of the war covered in as wide and generic a sense as possible. While the interviews that underscore the entire film are of course specific, they are rent from their direct context so as to allow them the bizarre position of ‘general anecdote’. The wheres and the whens are forgone for the general atmosphere of war. This is justifiable, but feels rote, and paradoxically impersonal. Jackson will often cut to close-ups of soldiers faces to directly humanize them, and yet these soldiers will remain anonymous, matched to voices that are not their own, intercut with battles in which they did not fight. As associative montage this might be effective, but it does seem a little at odds with Jackson’s initial purpose. This also leads to Jackson’s trouble when representing scenes of battle in a larger sense, as the exact kind of grittiness he would like to impart was never captured (or archived) on film, other than the grisly leftovers. As such he must fall back on printed images of battle, with a ballistic soundscape of artillery fire and the occasional bagpipe standing in for visual effect. A conspicuously absent feature given its core importance to understanding the experience of war, even if the descriptions on the soundtrack serve as adequate substance in lieu.

They Shall Not Grow Old is, as such, a strange contradiction of sorts. As a documentary, it is entirely uninspiring in form, and other than its brief treatment of the post-war experience it offers little novel in terms of structure. But the direct experience of witnessing these soldiers resurrected by digital technologies rebukes any loss in confidence instantly. To see these men looking so immediately real (the footage not only colourized, but stabilized, and smoothed) is startling. While the black-and-white footage untreated could hardly be described as inhuman, it has previously served as a unique sort of cage for the men of the early 20th century. Where wars of deeper history lack such filmic record – and so are simply imagined in colour, inspired by clearly contrived elements of visual art (paintings etc.) – the nature of film is such that these monochrome images become a sort of phantom memory for those recalling these battles beyond their years. It is in much the same manner that young children often wonder if the past was in black-and-white entirely. And it is for these children especially that the film has been constructed; it aims to break this silver cage, and create a new, vivid, memory of the past. In this it undoubtedly succeeds.

They Shall Not Grow Old is currently showing at the Imperial War Museum. Check out its trailer below: