Peterloo opens with what many consider Britain’s greatest triumph – the battle of Waterloo. But Mike Leigh does not shoot the flag triumphant, nor Wellington on horseback, nor Wellington at all. Instead he finds a single soldier, frightened in the mud and cannon fire. He is a boy barely twenty, it would seem, bewildered and afraid, experiencing less a victory than a trauma. Leigh’s lens is, as usual for his filmography, set low. He cares little for the largesse of war and battle in favour of prioritising a man caught in its fury, unwilling and unknowing of its full context or import. He doesn’t bend or distort history for his purposes – his presentation of events is remarkably and admirably accurate – but rather presents it in such a manner that it becomes a protest incidentally, both against the way history is remembered and the state of politics in the modern day.

The climax of the film is the massacre after which it is named – the result of a cavalry charge into the then-largest public gathering in Mancunian history during the August of 1819. But before this event of brutal and needless violence is dramatized, Leigh goes to extreme lengths to contextualise and frame it, and grant it meaning further than simple outrage at clear injustice. His manner has been criticised as laboured or repetitive, but I see it rather as a thorough, full-bodied reading of events that would make Rossellini proud. The multitudes of public meetings, for example, do not differ greatly in content or direction. But they do suggest not only a tactile increase in support, but the way in which bread-and-butter issues can inflate and contort at the behest of certain charismatic individuals. We see various orators rattle against one another, from the measured pragmatism of John Knight to the near-Biblical radicalism of John Johnston. Crowds who would never otherwise give Johnston an ear are now swept up in his rhetoric; the lack of basic provision permits unnecessary extremism to take hold. It is in this basic presentation of historical fact that Leigh can comment on the present, and there is a certain elegance to his method.

This is seen again during his time spent with the women’s reform movement, in which a largely middle-class crowd get so lost in their refined prose that their working-class supporters are literally unable to understand what exactly it is they’re saying. This is especially pertinent, and Leigh’s emphasis on it is obvious; so much left-wing intellectualism supposedly for (and to be actualised by) the working classes is written beyond their means, or obfuscated needlessly through the black hole of academia. Again, history is in no way mangled by this emphasis, nor is this a case of twisting a narrative out of shape to fit a pre-existent agenda. Rather Leigh finds and presents parallels without altering their original context in any way.

But it is in the women’s reform movement we also see a good example of Leigh’s version of history, very much eschewing the top down approach that pervades even modern historical readings. While admitting great amounts of time to the notable characters of nineteenth century Manchester, Leigh never loses sight of that boy at Waterloo and his kin. This family grounds the story, and maintains a human interest that so many similar historical epics do away with in the name of scale and grandeur. This is naturally furthered by Leigh’s greatest strength – character work. Even the minor roles are granted an instant personality by his intricate method, Leigh often working for months with actors, preferring natural interaction to overly scripted dialogue. The result is often slightly caricatured, a mild exaggeration of a familiar reality, but never in a way that makes these people feel unreal or obscene, at least not among the central cast. Some are intentionally exuberant, not least the vainglorious would-be poet Reverend Etlhelson, but these characters serve to ornament the film’s selvedge with a personality that the historical genre often rejects for the sake of supposed authenticity. Such a grave and important event need not be cloaked in the prestigious guise that covers the likes of Lincoln or similar – it is through warmth and comedy that the story can engage rather than alienate, especially when so stringent with historical detail otherwise. 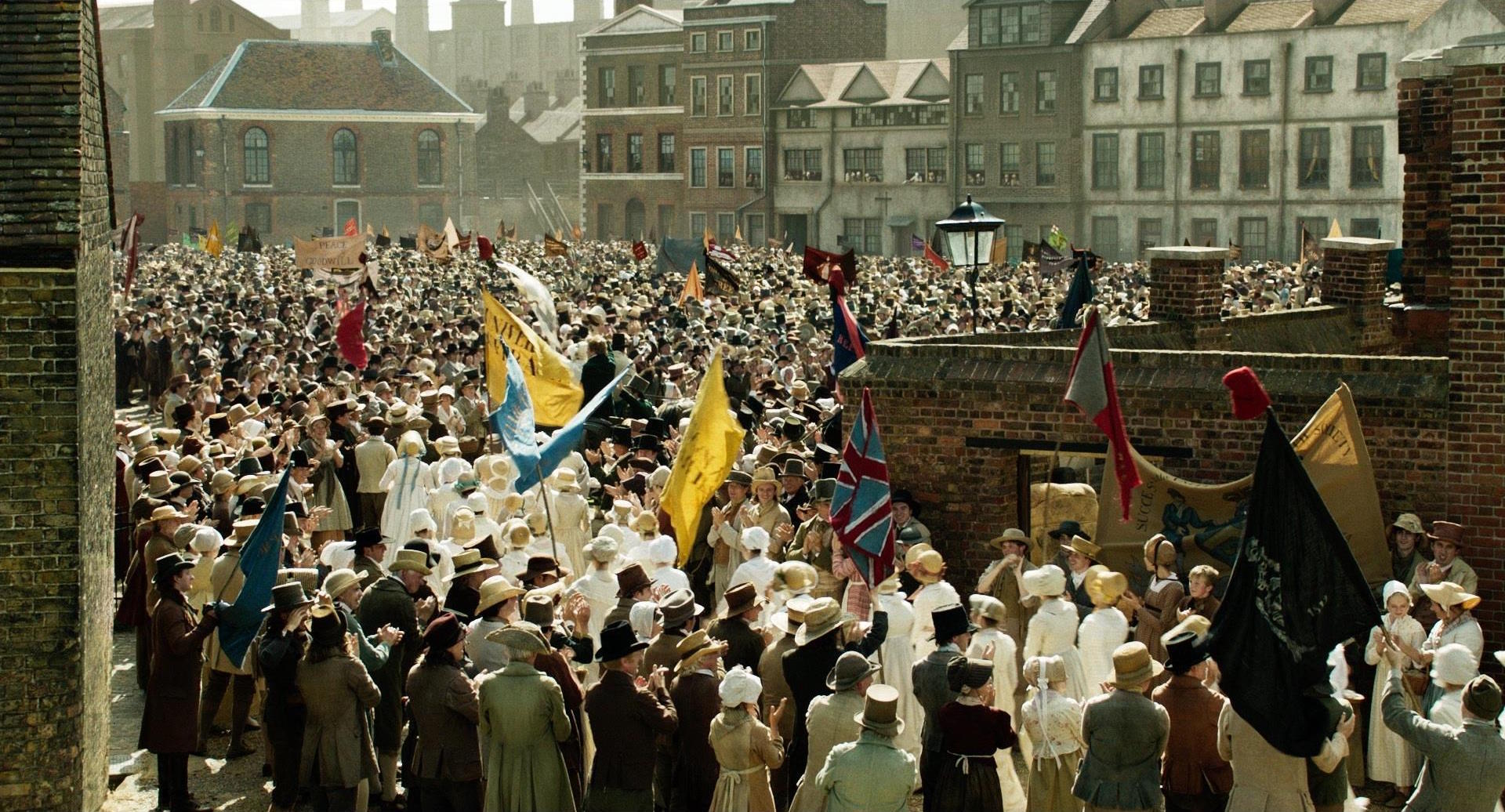 As such Peterloo is something so many grim-up-north films are not – vivid. Dick Pope’s bright cinematography matches the performances in its agreeable tenor, and is joined by production design that eschews a focus on mud and dirt (present though they are) for the brightness of industrial England, not least the various flags taken to St Peter’s Field on the day of the march. I find it equally vivid in its telling of history, too, though this might be a more specific interest. It evokes its period beautifully and conjures up various familiar figures with fresh vigour. Even very minor characters, such as George IV’s brief appearance, are memorable. That it can then propagate a rounded and faithful account of events without leaving any of its audience behind – as according to its own criticism – makes it a doubly attractive proposal.

This is almost certainly a film that will, at some point, be played in school, likely across an entire month owing to its gargantuan length. It is for much the same reason I imagine some might find it off putting, as much a drama as it is a lesson, concerned with fact as much as with human emotion, rather than offering the latter a significant advantage as would be usual practice. But I feel Leigh finds a perfect blend. The obsession with history that Rossellini fell into but without the ascetic tone; instead Leigh has managed to meld into this his inimitable and welcoming style. A vague exaggeration, perhaps, but a fair compromise by all accounts. Peterloo is beautifully crafted, immediately compelling, and deeply sincere – another success from one of Britain’s finest directors.

Peterloo will be released in the UK on November 2nd. Check out the trailer below: