Foaming saliva, glaring teeth, clinging chains. A vicious pit bull strikes, barking with rage. The audience is taken aback by the canine’s frenzied behaviour, snatching uncomfortable half-glances at the screen. Moments later, Marcello (Marcello Fonte) coiffeurs the animal, all the while cooing “sweetie” and “good boy”. The dog is calmed, and Dogman begins its convoluted tale of human despair.

Matteo Garrone’s latest crime drama Dogman brings us the story of Marcello, a timid owner of a dog-grooming salon in a tiny suburb in Rome. He loves his young daughter Sofia and plays occasional football with his buddies. To make ends meet, Marcello is also small-time coke dealer, which explains his good terms with other members of the tight Italian community. The peaceful serenity of his life is however shaken up by the local sociopathic bully Simone (Edoardo Pesce) who feeds off Marcello’s meek and unassuming character. Despite that, Marcello desperately wants to be on Simone’s good side – an issue that makes itself clear when he saves Simone from a revenge bullet from the locals who have had enough of his destructive demeanour. Marcello goes even as far as going to a prison for a year, only to realise a tad too late that his “frenemy” has stripped him of everything. 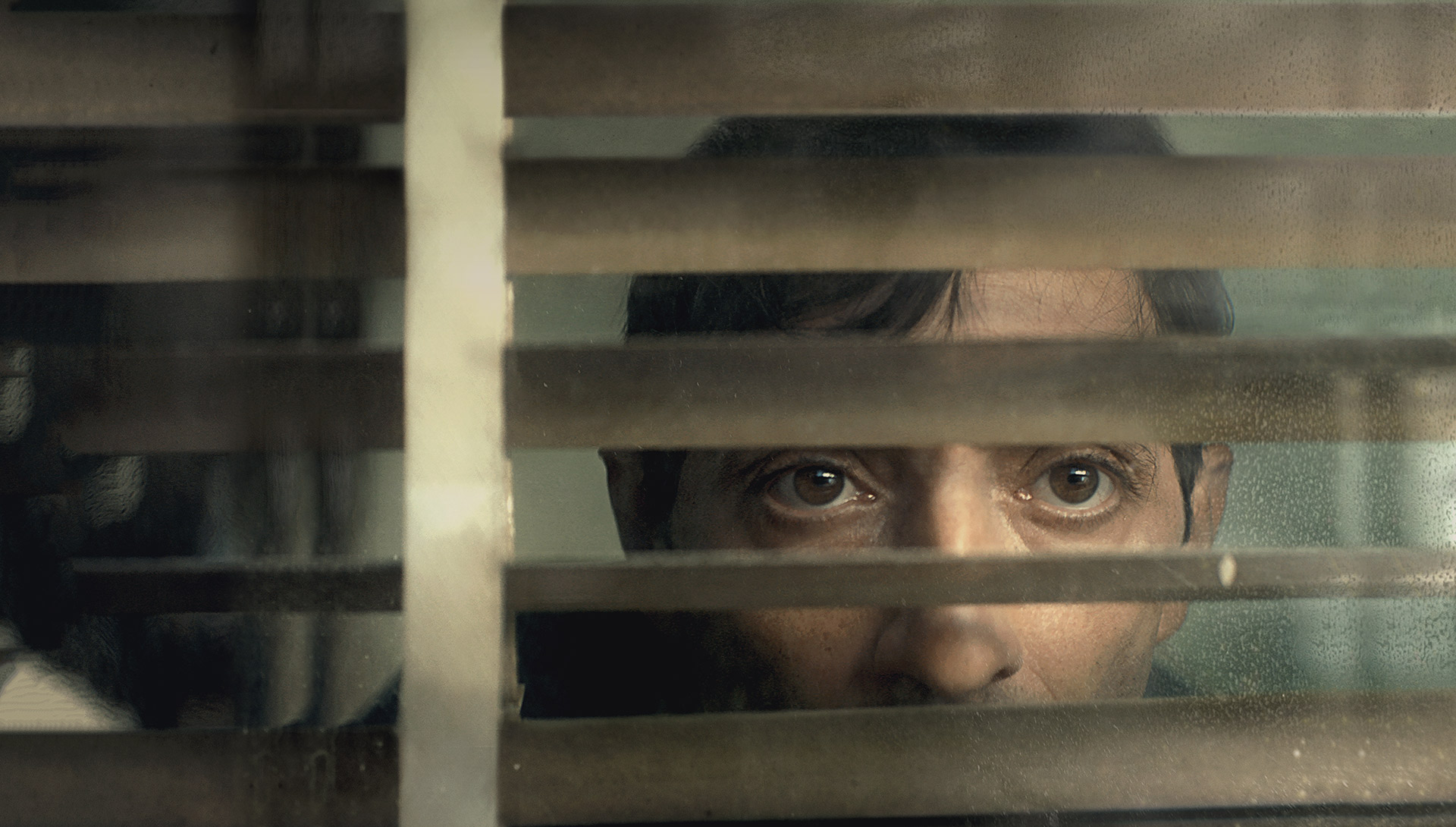 Characteristic of the questions it is trying to explore, Dogman is built on polar opposites. One moment we witness the heart-warming relationship between the father and the daughter; the other – we tense up at the stomach-churning violence educed by cocaine-huffing and uncontrollable aggression. At the heart of it is the protagonist himself. On the one hand Marcello is a sweet and loving character, who cherishes for his daughter, loves his job, and tries to love the life around him. At the same time, it is hard to ignore his responsibility in Simone’s becoming of a maniacal coke-addicted monster that terrorises the neighbourhood, and the masochistic relationship he chooses to endure. Drawn to Simone by his brutal confidence and questionable degree of power, Marcello enables his drug addiction that clearly only has destructive consequences. Yet it is impossible not to feel for Marcello’s meagre existence characterised by his loneliness and pathological need to be liked by everyone. Behind every pathetic action he makes, there is a gulf of sadness and desperateness, a scream for help out of helplessness.

Deservingly, Fonte has bagged himself the Best Actor for the role at Cannes. Fonte inhabits and sees through his character so fully that he never lets naïve kindness fused with despair go out of his eyes. His astonishing performance brings out every nuanced contradiction of his character – it is enough to glimpse at Marcello’s face to realise the pain and turmoil behind a hesitant smile. Pesce’s portrayal of Simone is equally impressive. His character is like an untamed beast who goes on rampaging peoples’ property and lives, and Pesce executes the role perfectly, leaving you with feeling utmost animalistic horror.

Marcello is compelling in his idle loyalty to Simone, although that does rear into the audience’s frustration. Midway through the film this relationship of subjugation becomes so inconceivable, it ceases to make sense entirely, hindering the emotional realism for the sake of the plot. That’s not to say this renders Dogman completely unrealistic. Indeed, at times it becomes too real. Once Marcello seemingly transforms from a feeble dog-groomer to a man brooding on revenge, the boundaries between what is good and evil blur completely, inviting the audience to ponder on moral ambiguity of each character. During one of the most climatic scenes – when Marcello traps Simone in a dog’s cell and ruthless violence ensues – there is little left of that sweet-natured innocent champ who just wanted to keep out of trouble and enjoy his peaceful life. Yet again, he doesn’t let Simone die and even attempts to help him before the bloody fight resumes. Dogman shows how easily one can slip into bitterness and vengefulness, but still seems to reaffirm Marcello’s innocence and kind heart. I, for one, wasn’t so sure anymore. The scene leaves a bitter aftertaste about humanity itself, or rather the loss of the humane. Ironically, actual dogs in the film seem to be more humane and dignified, something that cannot be said about the people. 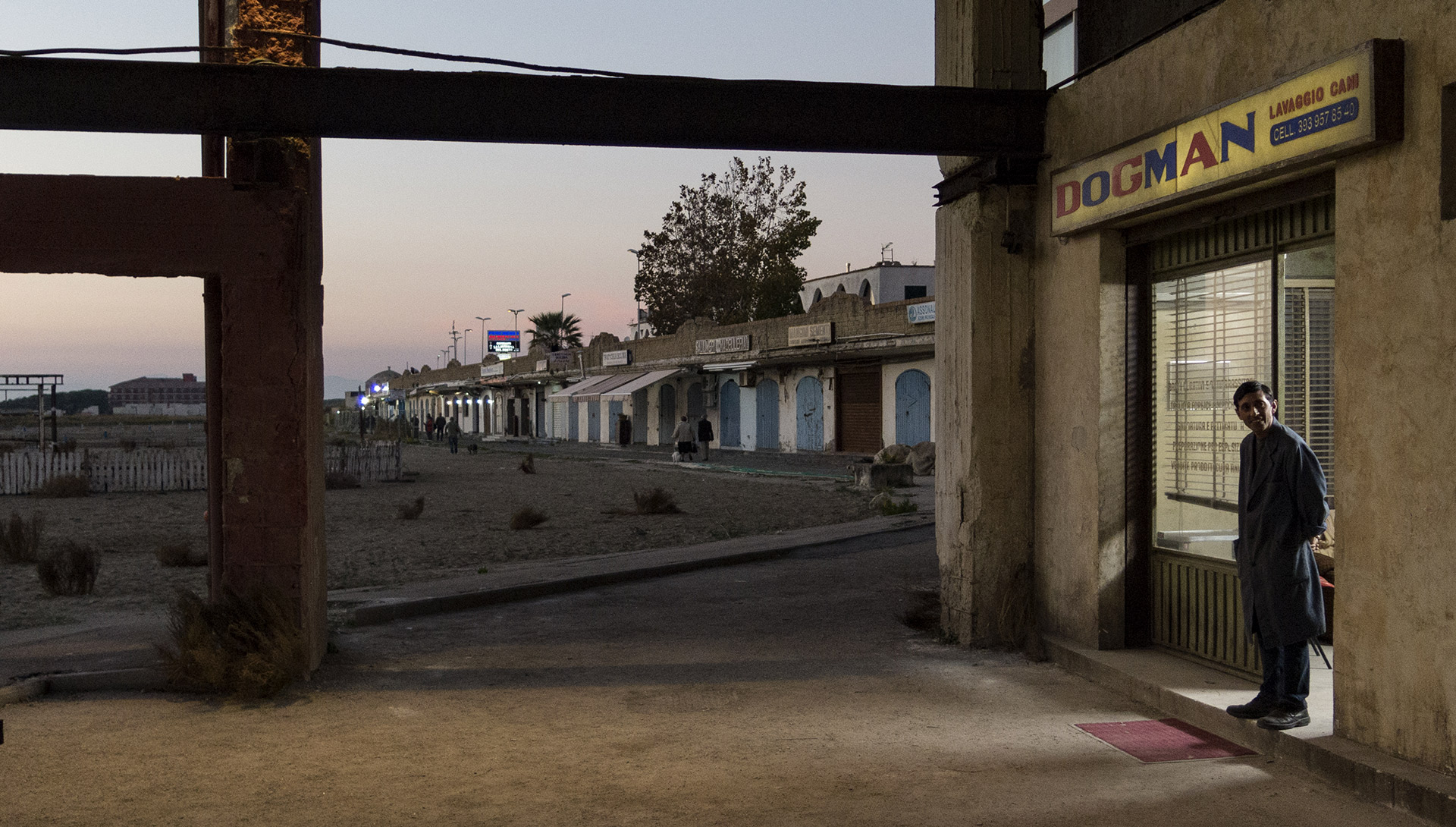 On a technical level, Dogman’s cinematography is a visual delight. Bathed in a predominantly grey colour palette, the long takes lingering on bleak landscapes perfectly capture and reinforce the interior worlds of the characters. These are lives of ordinary small people enveloped in their worries, with a common goal – to survive until tomorrow and live another day. The neglected setting, almost crumbling apart, reveals the subtleties of this small community intertwined with criminality and feels uncomfortably organic. There is surprisingly little incidental music, and the film does not call for one. It is the unbearable silence and passion-filled dialogue that creates the atmosphere in Dogman.

A story that examines the human condition, Dogman asks the ever-so-constant question: “What is it that makes us human?” It challenges our conceptions of innocence and evil, urging to look the answer within ourselves. A potent film that gives much to think about.

Dogman is currently released in cinemas. Check out its trailer below: