The first sequence of Atlanta’s second season sets the tone for every other episode: two young unidentified men prepare to raid a fast-food restaurant, which escalates to an incongruous stand-off ending with an aerial shot of a bloodstained woman, screaming and crying in the middle of a road. From this premise onwards, the phenomenal showrunner Donald Glover strives to demonstrate that Atlanta: Robbin’ Season is not just a follow-up to the successful and more light-hearted first series, but truly a new chapter in the lives of Alfred (Bryan Tyree Henry) and Earn, played by himself. This opening act shows none of the already established characters, yet it still feels appropriate and relevant in a series which continually oscillates between dream-like sequences and chronicles of everyday African-American life in the Georgian city. Atlanta’s exceptional blend of comedy and grittiness, and its hauntingly realistic themes set it apart from any other show on television, unashamedly capturing and presenting the nuances of black identity in America. 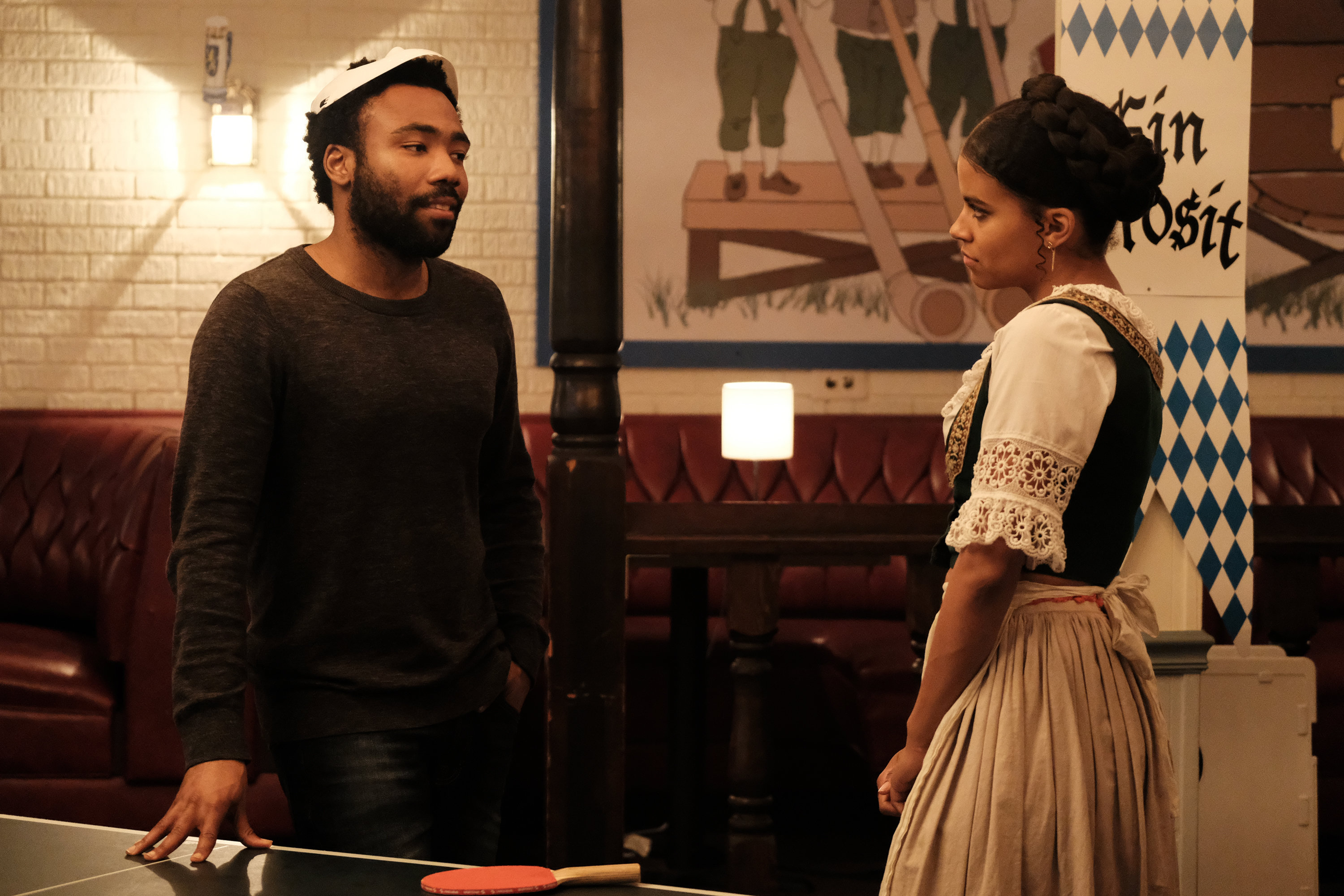 The second season’s title, referencing the time of the year, around Christmas, during which many robberies occur, establishes a hostile atmosphere for the entire string of episodes. Atlanta: Robbin’ Season acts as a learning process for Alfred, aka Paper Boi, and his team comprised of his cousin-manager Earn and astute pothead-philosopher Darius (Lakeith Stanfield), who must grow out of their lovable underdog status, as they face increasingly dire challenges. This second instalment feels very much influenced by Get Out, both in its depiction of the African-American condition in the United States – which Jordan Peele compared to the one experienced by Frankenstein’s monster – and its incorporation of supernatural segments. These elements are particularly salient in the second episode, during which Alfred and Earn go to a Spotify-like streaming service, where the rapper’s every movement is seemingly followed by their entirely white staff. Earn undergoes similar discomfort in the fourth episode, which takes place during a fictitious German festival, as Glover’s character is forced to participate in mysterious games by his girlfriend Van (Zazie Beetz), surrounded by participants in strange animal masks. The festival’s menacing atmosphere is enhanced by the use of 100 and 200mm lenses, meant to make the characters appear as if they were being spied on, and similarly, the absence of subtitles during German-spoken parts favour the spectator’s identification with alienated Earn. Atlanta’s exploration of the themes of racism and African-Americanness are never gratuitous, because they always contribute to character development: the fourth episode, through Earn’s estrangement, truly marks the separation between him and Van, as Glover’s character blames her for dragging him into this “white culture” he is not comfortable in.

The season’s standout episode, Teddy Perkins, also starts with the protagonist’s alienation in an unfriendly environment, before proceeding to explore the horrifying consequences of childhood trauma. Once again fully embracing Get Out’s atmosphere, it is appropriately led by Lakeith Stanfield, playing Darius, who opened Jordan Peele’s film. This episode takes place in a colonial mansion owned by a mysterious man bearing an incredible resemblance with post-surgery Michael Jackson, whom Darius visits in hope of acquiring a piano. Teddy Perkins is played by an exceptional Donald Glover who stayed in a white mask for the entire shoot, undoubtedly contributing to his eerie performance as a deeply troubled man, who was beaten by a father in perpetual search for excellence. One of Atlanta’s most unforgettable moments is featured in this episode, as Darius witness his host dipping his fingers into an ostrich egg before ingesting it. Such grotesque occurrences should make Teddy Perkins teeter between comedy and drama, yet its most entertaining aspects are eventually balanced out by its tragic ending, which leaves Darius and the spectator equally scarred.  Directed by Hiro Murai, one of Glover’s preferred collaborators, and shot by cinematographer Christian Sprenger, Teddy Perkins remarkably plays on shadows and contrasts, perpetuating this season’s grainy look, even earning praises from Steven Soderbergh, who called it “the most beautifully photographed half-hour of television I’ve ever seen”. Its aesthetic beauty is only matched by its narrative significance, as the episode marks the beginning of the season’s second half, during which Alfred and Earn face life-threatening challenges.

The hostile atmospheres depicted in Atlanta appear as reflections of Glover’s harsh assessment of the United States, which surfaced in his recent music video for This Is America, also directed by Hiro Murai. The song’s refrain, which sees him repeating “Get your money, Black man”, could be this season’s motto, as Alfred and Earn must both take crucial decisions in order to make a living and survive in the rap world. Paper Boi learns to understand the consequences of celebrity on his life and the limits of wanting to stay “real”, whereas Earn, in a gut-wrenching finale, learns to become ruthless and put himself in front of others. Darius summarizes their situation in his usual, laid-back way: “Y’all both black, so I mean, y’all both can’t afford to fail”. The penultimate episode, featuring Alfred (Abraham Clinkscales) and Earn (Alkoya Brunson) as teenagers, paves the way for this realization, as Brunson’s character faces possible humiliation because of the shirt he is wearing, which appears to be fake. The episode’s most meaningful scene occurs when Earn is told by a white friend that he should not worry too much about what he wears, showing how appallingly early African-American consciousness, through social and racial discrimination, begins.

Atlanta: Robbin’ Season is an undoubtedly remarkable follow-up to an already excellent first season. Its characters and story gain both in stature and relevance, making for an altogether exciting and still underrated series, in the image of its creator, Donald Glover, who is quickly becoming one of the decade’s most brilliant creative minds.

The last episode of Atlanta: Robbin’ Season came out on May 10th.